One of the comments I received about last week’s piece on Banishing Self-Doubt provided a perfect segue into a topic on the flipside of that issue: managing an unruly ego. Certainly, having healthy self-esteem doesn’t seem to derail an actor’s success as much as wallowing in self-doubt can, but that doesn’t mean it shouldn’t be kept in check. That said, if you’re the type who is genuinely concerned about coming off as “too full of yourself,” you probably aren’t going to do so. Still, it’s worth a look. Here’s the email.

Loved your article. Such an important issue in real life as well. At what point is it possible for an actor to be too confident (if there is such a thing)? I get a lot of “flack” for self-publicizing. I’ve always felt that it was part of the actor’s job description to let anyone and everyone know about the projects being worked on no matter how small or large. One actor on a message board referred to my postings as “polishing my own badge” (I thought that was pretty funny). My intent behind my postings has been to raise awareness of my presence in the local industry as well as bring attention to the projects that I am currently working on or that I have worked on. The comment made me question if there is a certain way to self-publicize. Anyway, thanks again for the awesome work on all of your articles.

Okay, so let’s break that down into three basic questions: Is it possible for an actor to be too confident? Is it part of the actor’s job to promote his projects? Is there a “right way” to self-promote?

Is it possible for an actor to be too confident?

No. And… yes. Of course it depends on your definitions. It is possible for anyone to come across as cocky or too full of himself. The problem is, most actors are quite sensitive critters (it’s part of why they choose this line of work) and one of the ways artists tend to shield their tender underbellies from the harsh realities of showbiz is by creating very healthy-looking egos. But just as owners of dating services and casting directors everywhere will tell you: Confidence is a very attractive thing. People like to spend time with others who feel good about themselves. We don’t enjoy surrounding ourselves with people who second-guess their decisions, mope about their situations, or doubt themselves at every turn. So, really, what you’re looking at here is the fine line between confident and cocky.

Confidence emits a sense of strength. It’s a centeredness, a self-assured connection with your purpose. There is nothing wrong with any of that. Cockiness, on the other hand, is somewhat inauthentic. There’s an arrogance to it that seems to have no connection to the “artist’s purpose” or creative center. Because so many fragile artist types will begin their quest for self-confidence by “acting as if” (since they really are overflowing with self-doubt and just trying really hard not to show that truth to the world), they actually do run the risk of over-compensating for that lack of confidence. That comes off as an inauthentic, self-important bravado that isn’t attractive to anyone.

I think, as long as the confidence is genuine, there is absolutely nothing wrong with embracing your talents and sharing your bliss with the world! Of course, you must get okay with having people attack that. As a dear friend once told me, “Not everyone loves seeing you be happy in public.” Sadly, there are people on this planet who take great pleasure in witnessing others’ failures or undermining their successes. So, while dialing back the confidence and joy with which you live your public life could perhaps save you some of the nonsense dished out by those who need to take swipes at you, I say it’s far better to just get okay with the fact that there are going to be critics.

One of my favorite quotes is from Howard E. Ferguson: Criticism can be easily avoided by saying nothing, doing nothing, and being nothing. Mediocre people play it safe and avoid criticism at all costs. Champions risk criticism every time they perform.

Is it part of the actor’s job to promote his projects?

Absolutely! It’s part of the self-management process! Until you have a fancy publicist or a studio’s team crafting your every public appearance in conjunction with your acting gigs, it is absolutely up to you to get the word out that you are working… and on projects that you are proud of. Heck, when you’re working at a high enough level, your deal memo will include clauses about “doing press” and being a part of the junket for the films you shoot. Promotion is a huge part of the success or failure of most creative projects. So, the fact that you are interested in helping the PR machine on indie films in a minor market is awesome groundwork for when your private jet is schlepping you all over the world to promote your third zillion-dollar budget action sequel for Bruckheimer.

That said, you have to know your audience. Perhaps there are some message boards on which posting “brags” will come off as inappropriate and even rude to those actors who aren’t working as much or as often as you are. (And maybe when they do work, it’s not on anything they’d be as proud to promote.) One of the ways to “fix” this issue is to use your personal website, your blog, your MySpace page, etc., as the venue for these promotional posts. That way, you’re not invading the space of someone else in order to do something that may be considered “over-sharing” by some. I actually created a Cricket Feet Mailing List for exactly this purpose. Folks can opt-in and out as they please and I’ll send out announcements of each week’s column topics, screenings of films I’ve cast, speaking engagements, book tours, seminar schedules, etc. I know I’m not bugging anyone who doesn’t want to hear from me, since each member of the mailing list manages his or her own level of contact.

Even with a mailing list set up, you can do an occasional “blast” to message boards or email groups without coming across as too “all about me.” Just include a reminder in these occasional posts that those who want to hear more can sign up for your mailing list. Trust me, they will! I think this is preferable to the whole, “Here’s my latest news,” thing in group settings. Specifically in online forums, it helps to look at the membership as a group of people gathered at a cocktail party. If the only time you speak is to step up on a box and say, “Hey! Here’s my latest project,” but you never otherwise interact with others, you’re going to stop getting invited to the party. I know quite a few cool people who are seen as total “me, me, me” self-promoters online. They hit all of the message boards and forums with the exact same post and rarely interact except to bring a topic around to themselves. If that describes you, yeah… work on that.

I’ve heard from some actors who feel that sending out a postcard about an upcoming screening or guest appearance on a TV show is “too much.” No. It’s not. It’s fine. And it’s also pretty unobtrusive. Email blasts… I’d pull back on those (or ask CDs, agents, managers, other industry types to opt-in so that you’re not being presumptuous). But postcards are fine for most of us. And they’re easy to get rid of if we don’t like ’em. Again, if you’re concerned about over-promoting, you’re probably not doing so.

Is there a “right way” to self-promote?

I definitely like the opt-in mailing list thing. I think a forum on any website that has a “brag board” or other specifically-designated-for-promotion subdirectory is fair game. Beyond that, your own website and MySpace page are yours for the pimping! Look at it this way: Theatre companies leave guest books out in the lobby for patrons to get on the mailing list. If someone goes to the trouble to sign up for the information, you can feel safe in sending it. If, however, you’re blasting out “brags” about yourself, your production company, your theatre company, whatever… and you’re doing so to folks who haven’t shown any interest in hearing about it, you do run the risk of coming off like a bit of a media whore. Only you can decide how much that bothers you.

Consider the story of The Boy Who Cried Wolf. Do you want to be known as the guy who blasts the world with unsolicited information about his projects or do you want to be heard when you’re promoting the big one that you really really really want everyone to know about? Self-promotion is a balance between carnival-barking and secret-whispering. The trick is to make it look like you have information that everyone wants without everyone saying, “Oh yeah, that guy. I know. I see his copy-and-paste blasts everywhere. He is all about himself.”

So, what does this come down to, ego-wise? Well, people with oversized egos tend to be feeding a need for attention. Think about any number of red-carpet events, during which microphones are thrust in the faces of celebrities. Let’s say the “dishy topic of the day” is something really scandalrific and everyone is sharing an opinion about it. There are two types of people at the moment the reporter says, “What do YOU think about that?” There’s the type who says, “Oh, I don’t know anything about that. I’m just here to celebrate a great night,” and then there’s the type who grabs the mic and says, “Oh my GAWD! I know! Did you see that?” and dishes like there’s no tomorrow, getting loads of screen time on the tabloid shows, just for having an opinion about something that has nothing to do with her. Now… let’s come back to the moment that either of those folks puts out a press release about a new project. About whose are you more excited?

Big egos need to be fed. Healthy egos are self-fed and don’t need anyone else’s attention in order to exist. Yes, you need a very healthy ego in order to survive this industry. Do you need a big one? Nope. In fact, it could hurt.

Originally published by Actors Access at http://more.showfax.com/columns/avoice/archives/000638.html. Please support the many wonderful resources provided by the Breakdown Services family. This posting is the author’s personal archive. 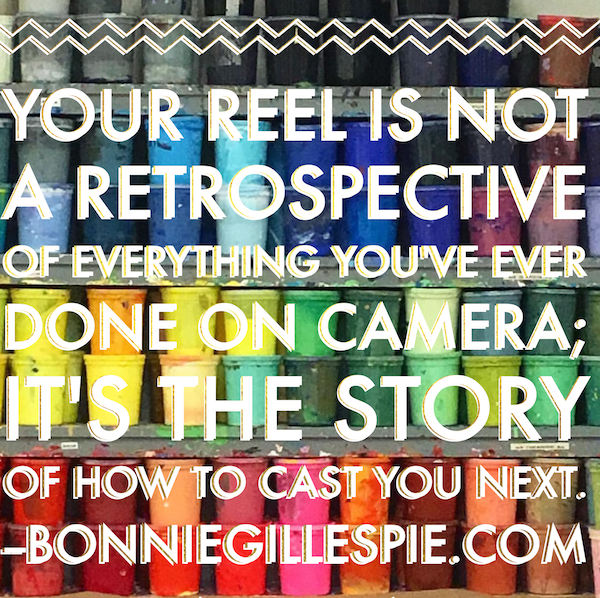