You’ve scored the audition. Yippee! You’ve re-read the breakdown to be sure you understand what they’re looking for, in casting this character for this project. Good job! You’ve downloaded the sides and begun making choices for the audition. Great prep! You go in for the audition, do everything you’ve prepared, and then it happens.

What do you do? Some actors do everything right in this moment. Others fail miserably for a variety of reasons, effectively blowing their chances at getting a callback. Let’s take a look at the various ways in which actors approach the audition redirect, noting some pitfalls to avoid.

Being Married to Your Choices

Actors repeatedly hear casting directors advise them to MAKE STRONG CHOICES. Absolutely true. We want to see you committed to the choices you make about the character, the script, and your overall presentation in the room. This does not mean that we want to see you locked into those choices so completely that you cannot adjust, when asked to do so.

I’ve seen actors — upon being given direction — turn stubborn, inflexible, and insulted in attitude. It’s as though they’ve been told, “You’re wrong. Every instinct you have sucks. Do it this way.” When, in fact, what they’ve been told is, “I like you enough to ask to see you do it another way.” Why the actor is being asked to do it another way could be because the actor’s choice was slightly off but the actor is the right type. Could be because the actor is right for another role and doing these sides with a different bit of direction could show us what we need to know about that potential casting match-up that you don’t even know exists. Could be simply that the director wants to know whether the actor can take direction (even difficult, complex, totally ridiculous direction), adapt quickly, and apply the changes seamlessly.

If you suffer from this problem, I advise that rather than feeling offended that you’ve been told your choices are wrong, you always assume your choices were exactly right and that the director is simply testing your directability. Whether that scenario is true or not, at least that mindset can help you through the immediate reaction you may want to have, which is what keeps you married to your choices after being given direction.

Inability To Understand the Direction

This is probably more common than we’d like to admit, on either side of the casting process. Miscommunication is always a possibility, especially in the high-stress environment of an audition. An actor may hear and understand the direction but get confused in the application. An actor may not understand the direction due to the fact that the director is unclear in delivering it (especially after having given the same direction to a few dozen people throughout the day and beginning to take shortcuts in explanation over time). Or, there could be references that the director has made with which the actor is unfamiliar. Definitely, an actor’s nerves could keep him or her from asking a clarifying question.

If this happens in your audition — whether you can’t understand the direction or the director can’t deliver it accurately — the fix is the same: ask a clarifying question. I know you may feel stupid in that instant, asking someone to re-state (using different words) exactly what has already been said, but believe me, an instant of feeling stupid is worth the payoff of getting the information correct so that you can nail the audition on redirect. If you begin to look at your choices that way (ask the question or lose the gig), you’ll be more likely to ask a question. Also, please know that YOU are the only one perceiving yourself as having asked a stupid question. We KNOW you’ve come into the room with a lot at stake. And, since we want to see you do your best, we’re happy to help you get clarity in order to present us with your strongest work. If you ask your question and STILL don’t feel like you have a handle on the answer, ask for a line reading. Most directors are cautious in giving line readings, as they know how much actors hate to be treated like trained parrots. Still, if you need one, ask for one. It could help you understand the director’s terminology better, to hear it applied to a specific line in the script.

Outside of the room, you can help keep this sort of thing from happening on your end by boning up on references that frequently stump you. After auditions, go look up words that were used if you’re unclear on their meaning. Read works by playwrights referenced, so you’ll know the style and tone unique to each one. Always arm yourself for success by reading as much of the script as possible before your audition, in case a director will reference something that has happened elsewhere in the story, during your audition. Keep great notes! If you hear the same things over and over in auditions, definitely speak with a coach about those particular issues and come up with a strategy to work out the kinks for the future.

This is sometimes the most frustrating aspect of the redirect, and it’s probably because we seriously have no idea why actors do this. This is when the actor hears and understands the direction given but ends up doing exactly the same thing anyway. This is different from being married to the choices, as there’s no attitude coming from the actor as though he or she has been offended. In this situation, the actor interacts with the director in a way that shows us he or she really GETS what we want to see. Then, when it’s time to start the second read, the actor provides us with a carbon copy of the first read.

Since we don’t believe actors do this because they’re married to a choice or they don’t understand the direction, perhaps it’s simply a case of habit winning out in a battle of Habit vs. Will To Change. Anyone who has ever tried to stop a bad habit knows how powerful existing patterns can be, no matter how great the will to change the behavior. So, let’s apply that concept to the audition room. You’ve been given an adjustment, but you’ve done the scene so many times in the one way you presented it at the audition that it’s tough to throw some of that away in order to do the “new” version.

First, you’re not throwing anything away. You’re building on the presentation you gave the first time around. Maybe getting that slight shift in mindset will help build a foundation ripe for adaptability. Next, be sure to spend some time during your prep for every audition doing improvisation in character. Throw yourself some direction and see what changes you can bring into the read without rewriting the scene. Who knows? You may just come up with the perfect take on the scene through this exercise and wow them from the first presentation you give! Also, if you’re not regularly working on improvisation in class, get to it! There are many wonderful classes for actors that include improvisation. Being comfortable with improv will serve you very well in auditions. You’ll find you’re much more adaptable than you thought you might have been, after learning the bliss of the, “Yes, and….” The low-budget way of teaching yourself how to adapt to new direction is simple and powerful. Start brushing your teeth using your non-dominant hand. I know that seems like a wacky suggestion, but it’s something that was recommended to me back in a teen acting class in Atlanta. The basic premise is that you CAN accomplish the same thing using a different method. I’ve found, when I’m in a rut about the way I see or do anything, this little exercise reminds me that I can see or do that thing differently without much effort. Try it. You may be pleasantly surprised by the ways in which you can apply this!

Most of all, note that you’ve been given a gift when you get redirected. You have an opportunity to do the scene again, and in a different way. Use this to your advantage so that the decision-makers get to see your range and flexibility. Whether this role is the one you book or not, the grace with which you handle the redirect could help you get invited back into that room next time.

Originally published by Actors Access at http://more.showfax.com/columns/avoice/archives/000247.html. Please support the many wonderful resources provided by the Breakdown Services family. This posting is the author’s personal archive. 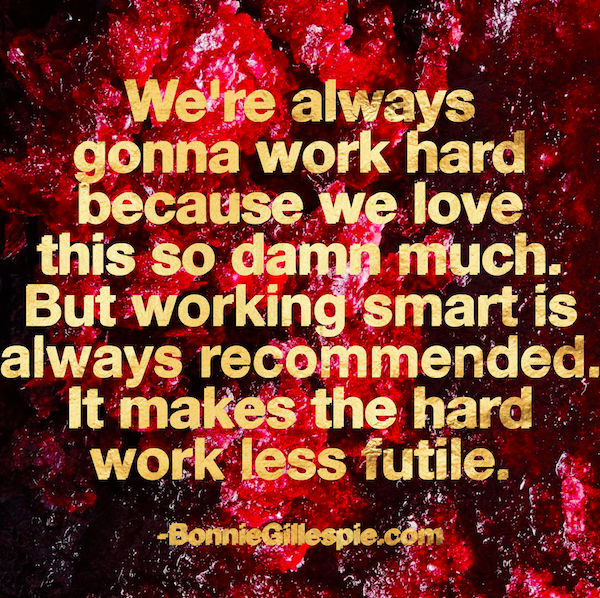