I’ve been reading your column recently and I love it. I’ve read your book, as well as other acting books as well. I praise you for giving the best advice possible for actors. There is one thing as an actor that I am deathly afraid of and that’s my age.

I feel like because I got such a late start in this infinitely hard career that I may be slipping. I am 28 years old and I’m afraid I won’t be en established actor anytime in the next few years. I know it takes a decade to really be someone, but I fear not being able to support myself in the process. There is a part of me that wants to give up because if I’m not a 19 year old, it’s impossible to make it here. I’m an attractive guy I think, and I know Hollywood is controlled by the young and fabulous (in my opinion since America in general is like this) and there are so many people like this out there.

I guess my question or concern is: Will I be able to make something out of this? I kick myself on why I didn’t start sooner because acting was always a dream, but I was afraid to start and not finish. Well, I finally am at that age where I would put the time and effort in, but because I am older, it will not pay off unless I started acting in my late teens or something.

WHERE ARE ALL THE ACTORS THAT STARTED LATE IN LIFE? I hear so much about child actors, or people who started acting in high school, or who had a breakthrough stage performance at 20 years old. I feel I use my age a lot in this industry because I will get chewed up and spit out as time goes by when there can be a gorgeous guy from Ohio who never acted before and gets a part because he is young and a fresh face, yet I am a better actor.

Should I quit now or do I push forward and hope I will get seen (hopefully when I’m not 40)? I want to act and I WILL put time and effort in to it, but is it worth it?

Phew! Okay, Todd. First off, breathe. I can feel the tension coming through your email and I just want you to relax and not worry too much about this, because worrying certainly isn’t going to help the situation!

Next, a few things you should know: No one is born a famous actor. No one is granted the status of “famous actor” and told they’re allowed to keep that status forever. Even those who luck into, seem born into, or hustle their way into fame early in life have to prove themselves with subsequent roles and projects, always aware their status isn’t guaranteed.

Also, let’s be sure fame is what you’re seeking. If so, I’d caution you to really think that over. You probably would actually love a career as a working actor, which is something very different than “being famous.” Many people in your position look at the famous people out there and compare their celebrity status to their own. Please don’t do that. These people have high-paid publicists whose jobs include making it look like they’re overnight successes. An Emmy-nominated friend of mine hired a publicist to take her through that red carpet process and was told, “You’ve been in town three years,” when the truth is, she’s been working and hustling and building a career in Los Angeles for nearly a decade. But the spin is what sells. Please, if you do feel the need to compare yourself to the famous actors out there, keep in mind that their “overnight success” stories are almost always fictional.

Better to — if you must compare yourself with others (which I discourage, of course) — look at working actors. Y’know, those folks whose names you might not know but who earn healthy salaries as working actors, year after year, supporting the famous people whose stories are plastered all over the magazines at market checkout stands all over the country. Plenty of them (and plenty of the famous people too, actually) “started late.”

I’ve written about “starting late” before. Check out this Your Turn from June 12, 2006 for some inspiring words.

What I recommend more than anything is that you decide if you’re in this or not. No one can advise you on what’s best for you and guarantee you that they’re right. Just like last week’s Your Turn talked about knowing the right time to make a move to Los Angeles, you’re in a situation where only you know if you’ll be happy pursuing this career. If you’ll always wonder “What if?” if you don’t pursue a career in acting, that’s no recipe for a fun life. And if you’ll pursue a career in acting always looking at those who found success younger or faster (whether that’s true or spin), feeling jealous and resentful and bitter, that’s no recipe for a fun life either.

So, my advice is that you determine whether you can be happy in your pursuit and then — if you decide that, yes, you can get excited about the process — have at it! Enjoy the journey. Have fun along the way. And stop comparing yourself to others. Your journey will never be theirs. So, get out of the habit of comparing and take a look at what would make you happy right now. Is it a pursuit of a career in acting? Awesome. Have at it! Is it choosing a career in which there is more linear progression, more predictable climb, and more “earnable” success? Awesome. Have at it and don’t regret giving up the acting thing. Nothing wrong with choosing HAPPY. In fact, I recommend that more than anything else.

Good luck, whatever path you choose.

Wanna check out my free email series on whether it may be time to take a break from showbiz? Head right over here to sign up for the goodies!

Originally published by Actors Access at http://more.showfax.com/columns/avoice/archives/001188.html. Please support the many wonderful resources provided by the Breakdown Services family. This posting is the author’s personal archive. 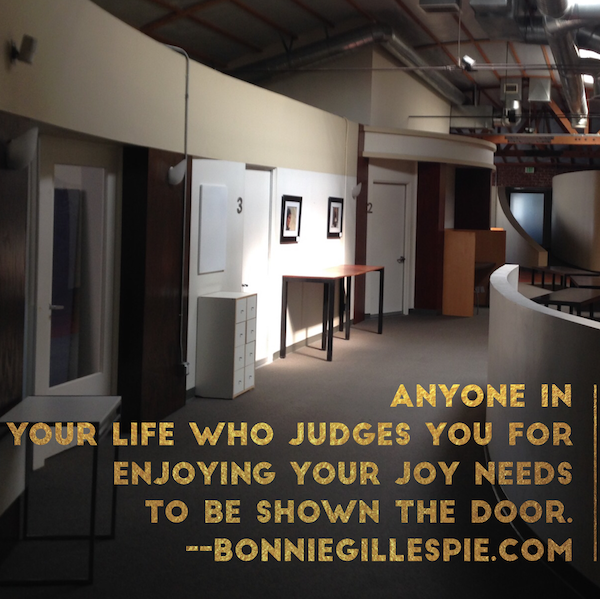