I was going to post this on the Actors Access message board then I saw the link to your column. I did a search but didn’t find any relevant links.

I booked a spokesman job and I’m working as my own agent on this deal (I have agents but I’m not represented by any of them on this one) and after we agreed on a rate they asked me for an exclusive arrangement for the client’s product category and for my market.

While I don’t have a problem with the exclusive arrangement, I feel I should be getting more than just my day rate. Do you have any advice on how to negotiate for a higher rate for product and/or market exclusivity?

First, congrats on the booking! Yay!

Second, I assume you’re in a market where being repped for the same category of work by multiple agencies is not a conflict (that couldn’t happen in Los Angeles), since you mentioned agents (plural) in a way that doesn’t make it seem as if they’re two agents who work in the same agency. 😉 Cool. No problem. I lived and worked in Atlanta for many years, and was repped by multiple agencies both in Atlanta and in surrounding nearby markets. I get it.

But I also get the value in having a professional negotiator negotiate the terms of your deal!

You certainly have the right to negotiate on your own behalf (I have cast actors who have, at some point in the contract process, said, “Hey, could I push for a better deal, here?” and it’s either NO because producers have laid down the law on that before the actors were selected or LET ME SEE, in which case we just go back to team to see what we can do). It’s not going to throw off the casting director to have an actor say, “Can we do better with this rate?” during the conversation about the contract, but it had also better not throw off the actor to hear, “Absolutely not,” because sometimes that’s just the way it is.

And if the CD is gruff or cold in delivering the NO, a sensitive actor could decide that means he’s going to be fired or never again called in by this casting director because he has made a misstep of unrecoverable proportions. Nah. You asked if you could get a better deal. The answer was no. The end.

Now, I’m going to take a moment here to suggest that — because you are repped by multiple agents — you go to one of them and get them to negotiate a better deal for you on this project. That’s an agent’s job! Thinking about what they may be able to get for you — when you consider paying 10% commission to the agent for that possibly way more significant increase in rate — is a no-brainer.

You didn’t say WHY you hadn’t gone through an agent for this gig, but common reasons include, “I got the audition myself” (which I never think is reason to exclude a team member from the deal) and, “my agent doesn’t want me doing this kind of work” (which then makes it tougher to bring that person in to help with the negotiating, of course). Since I don’t know what your reasoning is for going solo on this, I’m aware that my suggestion that you bring an agent INTO this deal to help you may not work out, based on info I just don’t have about your relationship and this particular gig.

But assuming you love your agents and aren’t trying to ice them out of commissions on self-submitted projects and they have no problem with you doing this type of work, I see no reason to keep them from the negotiating table on your behalf. They’re GOOD at getting better deals for actors, they have relationships with casting offices, they know all the different things they can ask for, they tend to know when they can push vs. when they need to let a particular point go, and for the small commission they earn on the deal, it’s totally worth having their expertise. Bonus: It keeps your hands clean with the casting office. You don’t run the risk of being perceived as a diva who wants to play hardball (not that I get that sense from what you’ve shared above, but in general, actors may fear that CDs judge them for standing up for a better deal and that could keep them from asking for fair increases or protections). You keep your relationship with the casting office focused on what you can do as an actor, while letting your team do the kind of thing that reps do with CDs all day long.

That’s so worth the commission, to me!

Whether you decide to bring an agent into the equation or to approach the next round of negotiations on your own, just know all contracts are negotiable and it’s your right to ask for something that feels more fair. Be prepared to hear that the rate was already set long before you were selected. Be prepared that there is no wiggle room. Be prepared that folks won’t want to have a conversation about changes to a contract they thought was DONE. And if you really are dissatisfied with changes THEY have made to the deal and you’re feeling they’re not meeting you with anything that compensates you for what you’re giving up, now, be prepared to walk away.

Especially where you’re giving up the ability to earn future money in a whole product category and within a specific market, pay attention to what you’re getting for what rights you’re granting. Check out Kathi Carey’s great piece on The Fine Print for more on this.

Good luck to you, whatever you end up doing! And good for you, looking to make the best deal possible in exchange for your performance. Keep me posted on how it all shakes down!

Originally published by Actors Access at http://more.showfax.com/columns/avoice/archives/001552.html. Please support the many wonderful resources provided by the Breakdown Services family. This posting is the author’s personal archive.

(Visited 174 times, 1 visits today)
be professional mind of the buyer 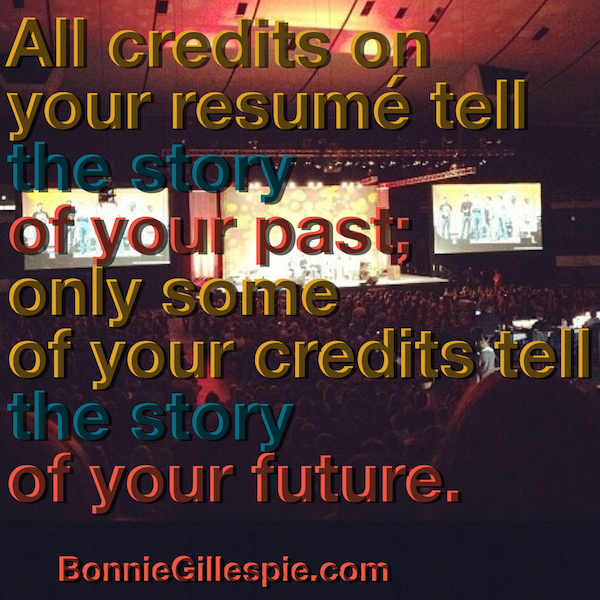