I remember hearing an interview with an A-List actor not too long ago. Not sure now who it was or what film was being promoted, but I grabbed a scrap of paper and scrawled (yes, in the car, while driving — I know, I know), “Column: One for You, Two for Them.” Later that day, I spoke with my husband about that concept and he said his acting coach has the same philosophy (but I think that his might be “One for You, One for Them” instead).

This weekend, I saw the amazing Juno and watched megawatt superstar Jennifer Garner doing a very simple, supporting role that she certainly didn’t accept for the money and I thought (among a thousand other things), “One for You, Two for Them.”

When you’re just starting out, you might take “One for You, Ten for Them,” because you really do need to build relationships, earn credits, get that first IMDb entry, get TAPE! And hopefully you’ll find ways to occasionally take “One for You that also just so happens to be One for Them.” (That’s the best scenario: You get to feed your creative soul while also earning a nice paycheck, fulfilling an obligation to a studio, or helping your agent package other actors on his roster on the same project.)

I remember seeing The Italian Job (yes, the remake — I know, I know) and absolutely loving almost everything about the film. Almost everything. Edward Norton, one of the finest actors on the planet, so completely “phoned in” his performance that I could’ve sworn I saw him glancing sideways at the audience through the camera, conveying a, “Yeah, I can’t believe I’m spewing this tripe either.” He didn’t want to do that film. He did it as “One for Them,” and honestly, at that point in his career, he could’ve just as easily said no to the project. He certainly didn’t need the money. And I doubt he feels any sort of pressure to get attached to projects so the development clients on his agent’s roster can also hop on board. There was no point for him to take this role to score this kind of character, to prove he’s up for “the challenge” of it all. And based on the reports from the set and the look of utter boredom on his face in every scene, it couldn’t be because he was so thrilled to have the opportunity to work with this outstanding cast and crew, right?

I made a note to myself (without knowing the concept of “One for You, Two for Them” at that time) that I would always at least make it look like I was having a blast doing my job, when I was honoring a commitment I had made to see a project through. And, sure enough, there have been a couple of projects I’ve cast that — in the last few weeks of my contract — came down to me smiling and nodding and then punching a pillow, working out extra hard at the gym, or pouring a jumbo-sized cocktail for myself. And, yeah, I’m sure I’ve had my “wink to the camera” moments in which it’s clear to everyone that I’m not doing a job “for me,” too. We’re all only human after all. (Of course, if I’m getting Ed Norton money, I’m gonna be one happy-ass employee for the run of the project. No question.)

If at first you’re doing one passion project for every (let’s say) ten you “need” to take, does that mean you automatically say YES to projects you don’t really want to do? Heck no! I’ve talked about “When To Say NO” before and I think one of the biggest challenges actors face when they’re starting out on a professional journey is finding that balance between getting the experience they need and knowing when a project is one on which to say PASS-a-deenah!

At first, it seems so simple: “I need work. Say yes.” But after getting burned a few times (doing copy, credit, meals projects for which you’re never provided a copy, and on which an IMDb page is never created, meaning you only really worked for food — hope those cookies were good), you’ll begin to resent those no/low-pay projects before you’re even offered a role in them. And that’s just bad energy! There are quite a few very good reasons to work for free (especially on great short films), so it’s important to choose well early on. That way you won’t burn out on the types of projects that are actually sometimes a wonderful source of material for your reel and fantastic foundations for future working relationships.

Learn how to spot the “low risk” projects. Look for crew members with a track record. Check everyone out on IMDb or at least with a good Googling. Ask to see any footage from previous projects they’ve done so you can have an idea of quality. Never sign on without having read the script! Beware the Island. Always sign a contract so that you are able to get out of it if they don’t maintain their end of the bargain (feeding you, staying on schedule). And be sure to get all sorts of contact information during the “Honeymoon Period,” so that you can pursue your footage after the shoot, should they not get it to you as soon as it’s ready. Heck, get the producers to sign the Holdon Log “Copy Provided” contract! And if they balk, ask yourself why… and whether you’d want to work with someone who is already refusing to give you a copy of the work you’re going to do for free.

Also important is knowing when you’ve evolved past the “One for You, Ten for Them” stage and can start saying NO to those projects you no longer need to do. It’s a delightful career crossroads when you can take a big gulp and say no to something you would’ve previously leapt at the chance to do, because it’s just not doing it for you now. It’s a role you already have tape of yourself doing. It’s a project at such a micro-budget level that you know it won’t ever get major distribution and you’re past the festival-run stage unless it’s — you guessed it — a passion project for you. It’s something that won’t pay but will take months out of your life, during which you won’t be able to pursue paying work… and you’re just dollars away from hitting “the good insurance” at SAG this year.

Yeah, it can be scary, saying that first NO, but I’ve found this business is really good about refilling the newly freed-up time with higher-paying, more-passionately-suited, more FUN projects, when you make those limits clear. “One for You, Two for Them” still means — unless you really do hit the A-List — that you’ll find yourself saying yes to a project for money here, another for a relationship-building opportunity there. But you’ll be working so frequently that those ones you do for your soul will feel like they’re coming one right on top of the other. And what fun you’ll have, preparing for those while finishing up some huge-budget project on location, analyzing investment opportunities for your current salary!

Originally published by Actors Access at http://more.showfax.com/columns/avoice/archives/000815.html. Please support the many wonderful resources provided by the Breakdown Services family. This posting is the author’s personal archive. 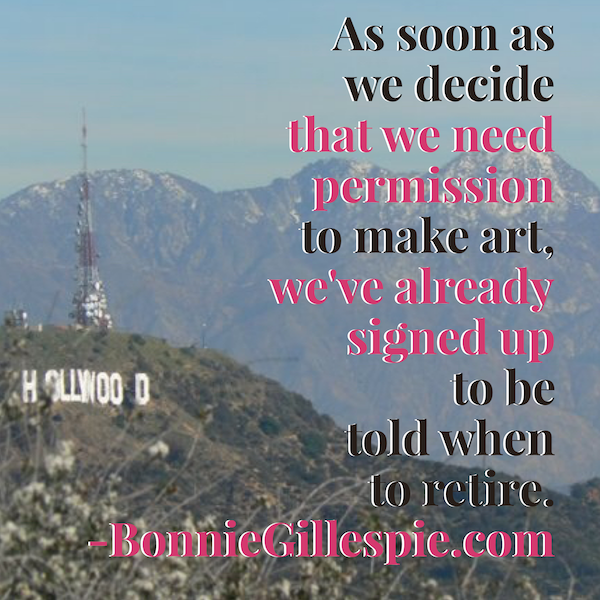