Another of your least favorite things (according to the emails I received in response to my question: “How Can We Make Your Job Easier?“) is a bad reader. True. Nothing can derail a thoughtfully-prepared audition performance like a reader who doesn’t read well. There’s the stutter-stammer type, the line-dropper, the mispronouncer, the mushmouth type, and — perhaps worst of all — the abyss of all emotion. Obviously, when you are preparing for an audition, you are doing so with the intention of having everything go right in the room. You are running lines during your prep imagining the cues being delivered accurately and with enough general emotional rhythm to help you sustain the momentum the scene deserves. But when you encounter the Crappy Reader Syndrome, you’re going to need to execute some sort of survival strategy.

Improvisational training will go a long way to help, once you’re in the room facing the dreaded CRS. With a strong improv muscle, you’ll find that a dropped line isn’t such a big deal, since you think fast enough to just jump right down to the next line, or quickly create a way to work your skipped cue back in. I’ve seen actors do an amazing job of incorporating reader flubs into the material. They use the bad reader as a part of their interpretation of the character. This, of course, works best when the character for which you’re auditioning is impatient, angry, or otherwise frustrated, but it actually works quite well in most situations.

What about after you’ve left the room? Are there strategies an actor can employ that will prevent (or at least limit) their exposure to CRS? From an email:

I have encountered many CDs that don’t have readers at auditions and “try” to read themselves, but can’t! They skip lines, read my lines, read script directions, and then look at me like I’m doing something wrong. I’ve actually banned some CDs. I’ve even told my agent I will not read for some CDs — doesn’t matter what the job is — unless I’m going straight to producers and meeting people who have some sense of what the script asks for.

That’s certainly one way to go! I doubt most actors will turn down auditions simply due to casting offices infested with CRS, but absolutely, if the problem is chronic and unavoidable, setting some ground rules as to which CDs you’ll endure is a fine idea. Obviously, if you’re never feeling as though you’re getting a fair shake in particular offices due to their poor reading skills, it could become a waste of time to go in at all.

But, I would ask that you consider the likelihood that the CRS you’re experiencing in those offices is also the CRS that other actors are facing. So, isn’t it an equalizer, of sorts, if everyone is reading with a “dud” of a scene partner? If that’s the case, then you have to imagine that some actors, over the course of the session day, are going to be the actors that are called back (and one of them, the one who will ultimately be cast). Do you believe that the actors who are called back happened to read with the reader the few times that the reader didn’t screw up? And that’s why those particular actors got called back? No way! Much more likely that everyone in on the decision-making process knows the reader bites and it’s the actors who rise above that obstacle and nail the performance anyway who get a callback.

You mentioned specifically that these poor readers are CDs. Personally, I don’t read with actors unless there is just no way to avoid doing so. I love bringing in my most talented actor friends to work camera and/or serve as readers, since they’re not only going to get a lot out of the experience (just being on the other side of the process) but also provide the auditioning actors with a much better performance than I could muster. I have far too many things on my mind at the moment an actor begins his or her read to try and focus on delivering lines accurately and with some bit of emotional connection. I really miss out on one of the best parts of my job (being a critical consumer of an actor’s craft) if I’m busy trying to serve as a reader at the same time. That said, I know many CDs who love to read with actors. They feel it gives them a real sense of what the actor is bringing to the role and settles issues of chemistry and commitment with a first-hand interaction. Personal choice, of course. And I’m not going to say CDs who read with actors are making a mistake. I’m just saying it’s not the way I prefer to do my job.

All this to say that perhaps there are some CDs who, like me, don’t read with actors unless they’re somehow down a reader at a particular moment. If that’s the case, certainly you could suffer due to our split-focus. On behalf of all CDs, I’ll apologize for such a thing happening. Sometimes it just can’t be helped.

From another reader’s email:

Actually read the entire line of the other character’s dialogue. I’ve actually had casting directors read the beginning of their line and skip to the end of each line to give me my cue.

I’ve actually seen that happen and, from a casting perspective, it really doesn’t cause a problem. Obviously, it could throw an actor off, which is bad. But in the case of particularly long cue lines, often it is simply an issue of getting to see what we deem far more important than the period of time during which you wait to speak again. We could simply be checking you out for type, and everything else may be far less essential, at that particular stage of the casting process. So, rather than think it’s a big deal to have a little CRS in such a situation, trust that we’re getting what we need from it and just continue on. Now, personally, I like to watch an actor listening and responding nonverbally to what is going on in the scene. That is one of the reasons that I pair actors to read together, rather than utilizing a reader in most situations. This very theatre-like auditioning process is something I feel strongly about (having started out as a theatre actor nearly 30 years ago), as it shows chemistry and commitment in a way that reader-assisted auditions sometimes can’t.

Of course, this can create a set of problems, while alleviating others. What if you are paired with a bad actor? What if the chemistry is all wrong? What if you simply cannot stand the person you are asked to read with? It happens. It also happens on the set, which is part of the reason you must, as an actor, develop a way of dealing with personality conflicts and never let them throw off your work. That is the only thing you control, often. Therefore you must find a way to protect your performance from outside influences. Yes, I realize the irony in that statement, seeing as much of your craft is based in the display of the impact felt by your every encounter. Still, you’re going to have to train yourself to deliver your best performance every time, no matter what. It’s what professionals do. Even when Crappy Reader Syndrome strikes at the scene partner-level.

For musical auditions, hire an accompanist who can PLAY PIANO. I know that sounds like an obvious request, but the number of times I’ve gone for Broadway, touring, and major regional theatre auditions just to have an accompanist who can’t sight-read and ends up killing my song. That is frustrating. In NY, for accompanists who have received numerous complaints, they actually have a complaint file at AEA. CDs should call them before hiring an accompanist from the file.

I absolutely support that suggestion! If I could consult a reader database before inviting an actor in to work as a reader for the first time, I sure would! It is always tough when I bring in a new volunteer reader and find he or she can’t deliver at the level I find necessary. I can only imagine that a non-sight-reading accompanist is potentially catastrophic at a musical theatre audition!

So, what do you do? Sing a cappella? Bring backing tracks? Bring your own accompanist every time just in case? None of these options is practical — especially in the very structured world of Equity auditions. Certainly, you could choose not to audition, when you see one of the dreaded “complaint file” accompanists, but that could be problematic, if you’ve spent a lot of time preparing for the audition, traveled a long way, or feel particularly attached to the project. While some of the CRS fixes could work in a musical theatre audition as well, the best strategy might be to prepare a couple of different pieces, then be ready to switch to the more well-known of the tunes, upon learning the accompanist is of the non-sight-reading variety. Just a thought!

With any audition situation that feels as though it’s veering out of control, you must remember that it is your time. An actor recently told me that his acting coach tells him never to ask to start again in an audition. That’s appalling! The time is yours. If something is misfiring, if a reader skips your most emotional paragraph, if you are paired with an actor you abhor, or if your accompanist is wrecking your music, you have every right to ask for another shot at it. The only caveat I will give, on that note, is that you should never ask to start again and then do exactly the same thing. That is very frustrating. If you ask to begin again, make sure you adjust the conditions before restarting. Politely point out that your lines were skipped, ask to be paired in a different configuration, or request to sing a cappella in order to be sure we’re seeing you do your best work. That’s what we want to see. Don’t surrender your audition to a crappy reader. Politely assert your right to have the fewest obstacles between you and your best work. And if we say, “No,” trust that we’ve seen what we needed to see, forget about this one, and prep accordingly for our next encounter.

Originally published by Actors Access at http://more.showfax.com/columns/avoice/archives/000328.html. Please support the many wonderful resources provided by the Breakdown Services family. This posting is the author’s personal archive. 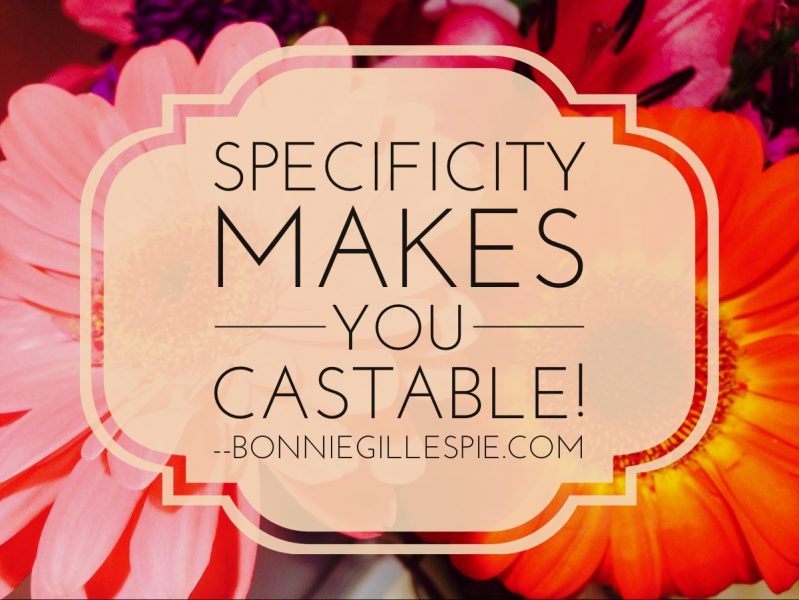