First and foremost, thanks as always for the great column. Recently you reiterated a point you’ve made in the past regarding castings that call for/require nudity. Although I’ve been told by managers and agents in the past to, “just submit, see if they want you, then you can negotiate nudity,” I took your advice and did not submit for a project that really interested me but said in black bold letters: REQUIRED NUDITY. I felt good about the decision. THEN, a couple weeks later I see the same post and they were looking for a nude body double for the girl who had been cast in the role!

I know of another situation where an actress was booked for a role and told the producers after the fact that she was not okay with the nudity. They told her they would have to go another way only to call four days later with a revised script and no nudity. She then of course took the role. So, what is the deal?

So many roles it seems require my type (female, 18-24) to exhibit tasteful nudity. That being said, do I follow the rules for the most part and not submit for a role that calls for nudity unless I think I might absolutely rock at the audition OR stick to the rules and possibly pass up on a role I would have loved? As someone who is just trying to inch my way to the top, I really can’t afford to piss off even one CD. Any of your thoughts on this are appreciated!

Let me start by saying that I so totally feel for you! I remember being an actor in the 18-24 range (with a much cuter figure than the one I have now) and being faced with this exact dilemma several times over. I never came up with the perfect choice in such a situation. Even now, as a casting director, I can only advise you based on what I have seen happen on the three projects I have cast (out of 25) that required nudity.

When you are at the beginning of your career, you struggle to know which rules to follow and which ones to blow off. Because there are CDs out there who would be majorly annoyed at an actor who submits on a project with blatant disregard for the role’s requirements, you do have to weigh the pros and cons quite carefully. You’re building your reputation, and while you absolutely could be the perfect actor for the role — for whom the producers would bend over backwards to accommodate — you just can’t know that for sure, and that’s the tough part.

Let me suggest what might have happened, on the film on which you chose not to submit. Perhaps the actor cast in the role is considered an actor with significantly greater “name value” than you might bring to the project. Perhaps she is related to someone affiliated with the project. Heck, maybe she’s a producer herself! Because there could be any number of reasons that this particular actor “rated” highly enough for the producers to endure the added expense of a body double, it’s hard to know for sure. And, hey, maybe it is just an “average gal” who had an experience similar to that of the actor in the example you shared about the script rewrite. We just can’t know for sure.

And because of the infinite variables, it’s tough to know whether you would’ve had a shot at getting the same results (a new breakdown for your body double going out, after you’d been cast). Sure, you could’ve submitted on a role that said REQUIRED NUDITY, auditioned for the role, been called back for a producer session, and then offered the role, only to reply with a, “Oh, but I won’t do nudity,” response. The producers could then either choose to go with someone else (and possibly be furious with the casting director for letting an actor who was never prepared to accept the role get this far into the casting process) or spend extra money for a body double, knowing there was no contest between you and their second choice actor. If the former happened, you could risk being blacklisted by the CD, the director, the producers, and anyone else to whom these folks cared to complain about your choice to mislead them. If the latter happened, you may be asked to front the cost of the body double (if this is a very low-budget project we’re talking about) or it may not be an issue whatsoever! You just can’t know, going in.

Certainly, I have had actors submit to me on roles requiring nudity and, in the NOTES section of the Actors Access submission, state that they aren’t 100% comfortable with nudity, but really like the sound of the project. Truth be told, I dismiss those submissions, as there are hundreds (if not thousands) of other actors also submitting for the same role. Since I also have top agents calling to pitch actors that the producers consider to have “name” status, I’m far more likely to go to producers with a call about those folks. For example, I’ll check to see how flexible we are with the nudity issue if we can get so-and-so for our film. If the producers believe that actor will help us get distribution for the otherwise festival-bound indie, they may be open to compromising their original requirements for that role. The thing is, I would never go to a producer AFTER putting out a breakdown to ask how much “wiggle room” we have on any of the elements for a “non-name” actor (that is, an actor who would have to audition for the role). It is assumed, by the time a CD has put out a breakdown, it’s as close to the producer’s vision for the project as possible. That’s why, on roles for which I know there is flexibility, I’ll say something like IMPLIED NUDITY rather than REQUIRED NUDITY in the initial breakdown. That way, we know we’re getting submissions from actors who are open to the concept, and it’s just a matter of nailing down the terms of the nudity rider after having chosen the right actor for the role.

I guess what it comes down to, for you as an actor, is the level of comfort you have with the process and your place in it. Would you rather submit, get called in for an audition, and then say, “Hey, you should know I’m not cool with nudity,” after getting that far into the process (knowing you risk rubbing people the wrong way by having wasted their time) or focus your energy on the many, many roles out there that meet your personal criteria (knowing you risk missing out on a few “great roles” from time to time)? The preference is personal. And it can also change from time to time. Just ask yourself which you would dislike more: risking that blacklist or focusing on the roles that are a better fit for you (before potential rewrites or body doubles). Oh, and the fact that you’re concerned about pissing CDs off means you’re very unlikely to do it, by the way. It’s usually those actors who don’t give a damn who they inconvenience along the way who find themselves less-frequently invited into the audition room.

Originally published by Actors Access at http://more.showfax.com/columns/avoice/archives/000439.html. Please support the many wonderful resources provided by the Breakdown Services family. This posting is the author’s personal archive. 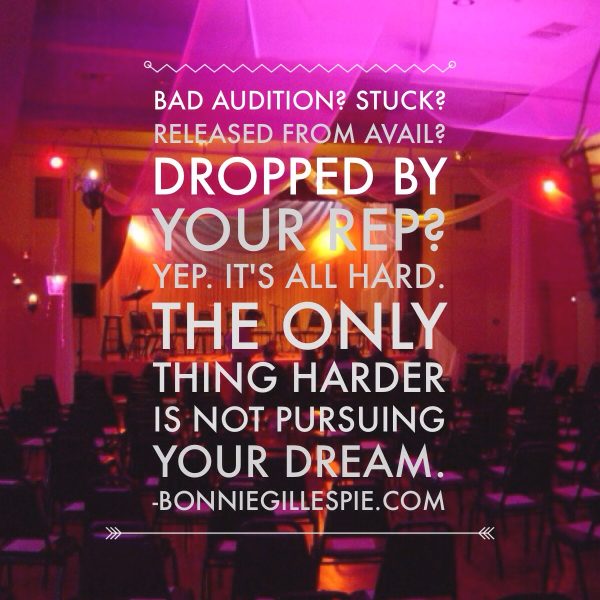