I was reading this week’s “Your Turn” and it took me until the second paragraph to realize, “Holy crap, it’s MY question!” Thank you so very much for taking the time to respond so thoroughly. Your answer is something I haven’t really thought of doing (I often feel like the one who needs mentoring!) but as soon as I digested it I completely understood. I’ve been out of school for three years now and I’m starting to run into friends who were sophomores and freshmen when I was about to graduate. It’s truly amazing to listen to them and remember what it was like when I saw things from their exact point of view. Three years’ time doesn’t sound like an eternity (it’s not even one Olympics cycle apart!) but when I’m talking with my slightly younger friends it’s astounding to see just how far I’ve come and how much I’ve learned in what feels like a blink. Thank you for making me conscious of this.

The other thing that struck me is the simplicity of just “staying the course.” It’s the difference between a sprinter and a marathon runner. Sure, we get shot out of a cannon as soon as those BFA Showcases are over but it’s when the momentum dies down that you have to find the energy to keep you going. I’ve already heard about a few classmates who’ve dropped out. I think there is something very powerful in just “sticking it out.” A friend of mine just opened on Broadway in Les Miz. He’s about two years older than me. We got together a few weeks back and he told me that he was exactly where I am when he was my age: A few solid credits and a whole lot of getting down to the wire in callbacks. But by simply sticking it out, working his butt off, and finding the excitement in every opportunity — that thing that makes you get up in the morning, the idea that today could just possibly be THE day — here he is, making his Broadway debut in the revival of the season (okay, not counting Company).

So thank you again.

Hey, no problem! I especially enjoyed reading your follow-up email to me because I don’t even know if you realized that your friend in Les Miz is doing exactly the kind of mentoring for you that you can do for those actors just coming out of your old BFA program. That rocks! I love all of the paying it forward going on in your life.

I know it gets tough to just “stick it out” sometimes, but it’s so important that you do. Unless it’s time to quit, it’s time to really buckle down. And, hey, if you’ve come so far in just three years, imagine how cool the view will look three more years from now! Write a letter to your future self. The perspective will be a treasure.

Since this young actor is now working consistently, it may be time to get a good publicist onto the team. A publicist can place stories in the media, can work with the publicists for projects you’re working on to coordinate efforts, and can build you from someone “reliable” to someone who actually sells tickets. Obviously, a publicist is useless until you hit the point where you’re working regularly, but it seems this actor is ready for one.

Please feel free to pass this along. Thought it might help.

Fabulous idea! Wow! Sometimes I really, really love this job. I get to put a little advice out there and then another actor reads the advice, thinks of another piece of advice, shares it with me, and I get to share that with everybody too! It’s just awesome how many people are so very willing to help one another, even in this supposedly cut-throat business where it is said that everyone is just climbing on the backs of everyone else as they go up that ladder, with not a care in the world.

Yeah, I don’t live in that world. I live in the one where everyone enjoys seeing another person do well, where good information is shared freely, and no one hesitates to lend a hand. Awesome.

Originally published by Actors Access at http://more.showfax.com/columns/avoice/archives/000646.html. Please support the many wonderful resources provided by the Breakdown Services family. This posting is the author’s personal archive. 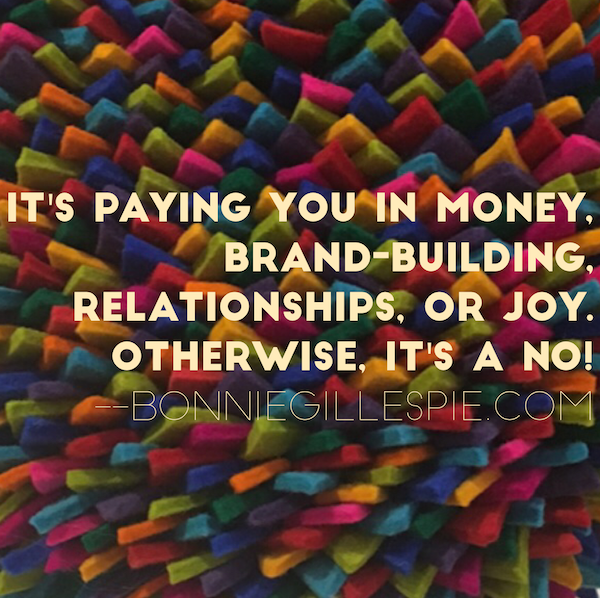