I love it when regular readers are inspired to share their thoughts about this business and our collective journey as creatives, together. That’s what happened this week, when Jessica Leigh Smith reflected on the “big reveal” on How I Met Your Mother. (Stop reading if you’re avoiding spoilers on the big question of this entire series, which was answered in a recent episode.)

As a big fan of How I Met Your Mother, I was totally psyched to watch the season finale and finally Meet the Mother.

Cristin Milioti may be a star on Broadway, but she is essentially an unknown to most of us — as I believed the Mother should be. I thought, from her brief scene, that she is perfect for the role and I am looking forward to seeing her next season. However, that is not what I went to bed thinking about and what I woke up this morning thinking about.

This girl went to an audition, and then a callback, and then another callback, and another, and however many there were. She was in there with other girls all hoping to be the Mother. She got down to the finals and then got the role. And most likely, she nor any of the other girls were allowed to tell anyone what they were doing. I imagine with a casting like this, as secretive as they were, Cristin may have had to sign an NDA.

She certainly wasn’t allowed to get on Facebook and tell all of her fans, friends, and family. She couldn’t send out a blast yesterday afternoon reminding people to watch her on HIMYM. She couldn’t have a viewing party to celebrate just how awesome her life was about to be. If she and her friends are fans of the show and regularly sit around wondering out loud who the Mother will be, Cristin had to pretend that she was still wondering, too. She had to lie about where she was on the day she filmed her scene.

I would probably have to lock myself in my house and never leave just to keep from blurting it all out.

This morning, Cristin is one of the top names being Googled. Everyone wants to know who she is. The viewers are invested in Ted so much that we all feel like we need to vet this woman he will one day want to marry. We will be right there with Lily, grilling her about everything. I just keep thinking how the actress must be feeling today, now that she can finally share the details with her friends and family that didn’t know. I truly hope she is a fan of the show, because that would make this casting that much sweeter for her.

It also made me think about someone else — there are just a few videos online of Cristin, one involves a duet with her co-star in the musical, Once. This actor, another “unknown” to those of us who can’t go see a Broadway show every week, is getting noticed by default.

You just never know what little thing you do today that can potentially lead to something else tomorrow. You never know which job is going to help you even two or three years down the road. And, maybe most importantly, you never know how the success of someone else can help you.

It’s another reminder that every step is important, every step should be fun and exciting and should be enjoyed for what it is, and that we should always have gratitude for the opportunities we and other actors have today. You just never know.

Thanks for your always inspirational columns. I read every week and get antsy to see what nugget you can give me. By the way, I just finished the process for incorporating myself, in part thanks to you.

Jessica, thank you for this. I’m not among the millions who watch How I Met Your Mother, but I remember talking about the whole “who will the mother be” question with my former assistant, who is an avid HIMYM watcher. Just from a casting perspective, this is fascinating, as it’s been known from the pitch of the pilot itself that there would be this big reveal, and this would be a coveted role for an actor to score. How long have how many actors’ names been on a list in the casting office for HIMYM? How many meetings and convos have taken place about this particular casting? When did the lucky actor who nabbed the role pop on the radar of the decision-makers and what made her the RIGHT choice?

So many cool questions to think about, and yes, such a big “win” but one that couldn’t be shared with friends, loved ones, anyone outside of the production team and her agent probably… when so many actors would be able to promote their big booking. I have private coaching clients on high-profile TV shows and they’ve had to NOT mention that their characters are coming back (or not coming back — one had to sit out a pilot season even though he knew his character had been killed off, because he would create a spoiler for the series, if he went out and HAD a pilot season before the episode in which his character died had aired) and when so much of your work as an actor comes from being able to let the world know that you ARE working, this has to be frustrating.

If you’re smart, you’re hiring a publicist to formulate a plan. Certainly, if I were the publicist for this actor, I would’ve been on the phone pitching “an interview with the Mother” all over town, knowing that the reveal of WHO this actor is wouldn’t happen ’til the episode aired. I’m guessing the network and the HIMYM team had press opportunities lined up for this actor too. Still, when your muscle is strong for mentioning on social networking outlets or via postcards or even in acting class that you’ve booked something, it’s gotta feel pretty constricting.

But what a great problem to have, huh? Thank you for this thoughtful essay, Jessica. Love hearing from you! Glad you enjoy the BonBlasts and all these fun weekly columns at Showfax. 🙂

Originally published by Actors Access at http://more.showfax.com/columns/avoice/archives/001663.html. Please support the many wonderful resources provided by the Breakdown Services family. This posting is the author’s personal archive. 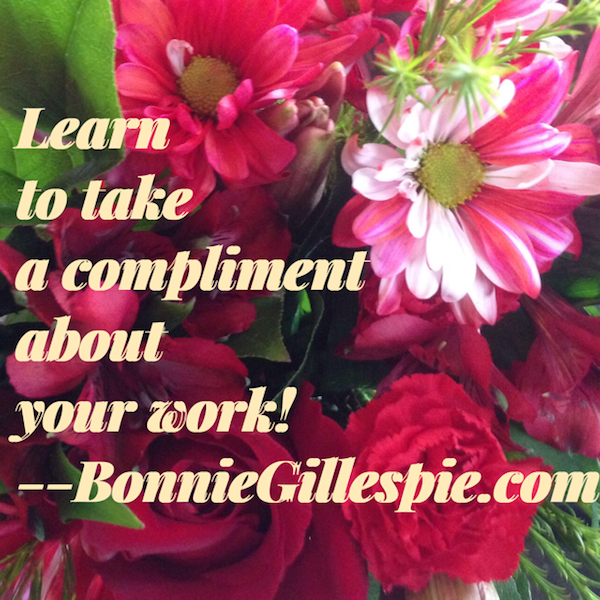