I keep a folder. Well, I keep two. One is the “What were you THINKING?!?” folder filled with the worst, most bizarre, beyond ridiculous submissions I’ve received since going into casting. I’m not going to talk about that folder. I’ve actually even stopped bringing it out when people who’ve heard of it come over and ask about it, because it’s really just depressing some of the gimmicks actors (and desperate wannabes, hobbyists, non-pros, mostly) will go to, just to “stand out” somehow.

The other folder is inspiring. I bring it out a lot. Like monthly, in front of a group of actors who gather to be inspired. It’s filled with examples of really brilliant marketing ideas. It’s stuffed with clever means of getting on the radar of casting directors and agents and managers. Postcards, cover letters, one-sheets, odd-sized mailers, demo reel packaging, even very stylishly formatted and on-brand resumés fill this file. I love it. It’s like looking through the best commercials for a product you need every day, when you work in casting and get to flip through these cool marketing ideas, well-executed.

Well, one of my favorite oversized postcards, which I’ve brought out every time I want to show actors a great idea they should steal (um, I mean, “be inspired by, when creating their own marketing materials”) is this one, from Allyson Ryan. 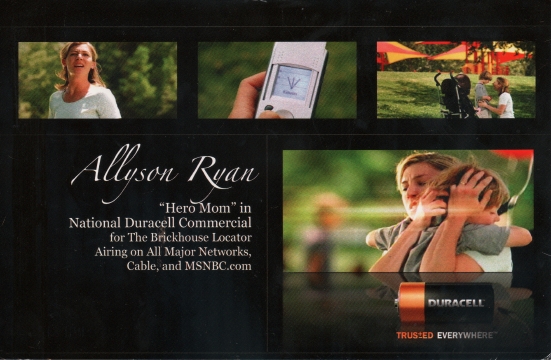 Okay, so I’ve had this postcard for almost two years now. I clearly remember this ad. It’s the one with the frantic mom whose kid has gone missing in the park, but all is well because he’s implanted with some sort of chip powered by Duracell or somesuch. We can all feel safe because the hero mom finds her child, thanks to this awesome battery-powered device that I don’t fully understand. But that’s okay. I’m not the target audience for this product. I am, however, somehow made to feel better about the value of Duracell, which is really the point of a commercial like this for a buyer like me.

(Of course, we don’t have an IMDb for commercials because that would lead to accurate tracking of airplay in all markets and therefore accurate payments for the work and God knows no one wants to see that happen, right? Yes. I’m being sarcastic. It’s ridiculous that a tool like this doesn’t exist, for casting, for interested fans, and for unions and agents trying to track payments for the actors in the spots.)

Anyway, some CDs will put out a notice in Breakdown Services when they see an actor they need in a commercial. Something like, “MEMO: To the agent representing the hero mom in the Duracell commercial with the missing kid, please contact me about a project ASAP.” I’ve seen that before. It does happen. We also put the word out to our agent friends, do a little Googling (remember the importance of making yourself findable when you’ve done a high-profile commercial and know folks are talking about it but might not necessarily know how to find you), and keep an eye out for folks in our thousands of theatrical submissions.

But I didn’t have a specific project for which this actor would be seen, right that second, so when the commercial aired, I just thought, “Well, she’s good. I’ll keep an eye out for her.”

Turns out that wasn’t necessary! Not too long after the commercial started airing, I received the above postcard from the frantic hero mom herself, Allyson Ryan. She cross-pollinated. She took her commercial booking and put herself in front of theatrical casting directors with it. Great thinking, great timing, great branding, great execution!

Now I knew who this actor was, should I need her down the line. More importantly, Allyson included on the back of this postcard her theatrical headshot (and a very nice note), which meant I would have an immediate recognition of her when that headshot came through on a theatrical breakdown. She could submit that photo and I’d say, “Oh, right! Duracell hero mom,” because she had sent me the postcard that connected those two things in my mind. Brilliant!

Okay, so if all of this happened in 2008, why am I telling you this now? Well, a few weeks ago, I was at a small gathering of industry folks and I saw a young woman there who I was almost certain was Allyson Ryan. In fact, I even wrote in my notes about the night, “I think that’s Allyson Ryan.” I knew her name was Allyson (didn’t know the spelling, of course), but we didn’t talk much. I saw and heard her interacting with others and she just seemed to have the same vibe that I remembered from that commercial (and then the same first name as the gal who sent the postcard), but I just wasn’t 100% sure. So, I later crossed out — in my notes about the night — the last name I’d written down. I talked myself out of that having been her.

Then came the following week, and I met up with these cool folks again. She and I got to talking a little bit and I asked if she did any on-camera acting (we had been talking about voiceover, previously). She said she did and I insisted, “Okay. I’ve got to know your last name.” And she revealed, “Ryan.” I immediately told her about how her postcard from the Duracell commercial remained one of my favorites in my folder filled with great marketing examples and she was predictably surprised that I not only remembered the commercial but that I saw the postcard when it arrived with the bins of other mail anyone in casting receives regularly, held onto the postcard, and used the postcard as an example of kickass marketing when talking to other actors.

Turns out, Allyson had included me on her mailing of that postcard because she knew my name from before she even moved to Los Angeles. She read my columns (for Backstage and then, here at Showfax) from New York since probably 1999, and she kept up with the fact that I had gone into casting, and used the fact that she could write a note to me about my writing (of which she’s long been a fan) to introduce herself to me (now in casting). Brilliant! Remember what I said about keeping a “show bible” filled with information about your target audience? This is a great example of someone doing that and finding success in doing so.

“Success” because I’ve cast her in some great low-budget indie that will play on the festival circuit for the next year? No. Not yet. But success because a relationship went from stage one (she knows me but I don’t know her) to stage two (now I’ve seen her commercial, so I know her work, but I don’t know her name so it’s not terribly helpful yet) to stage three (I’ve gotten her postcard, so now I know her work and her name) to stage four (we’ve met in person and now I know she’s not a “whactor” — thanks, Kristoffer Kelly, for coining that great term — and will definitely call her in the next time there’s a role that lines up for her in something I’m casting). Stage five will be the booking.

And look how much closer to that we are now, thanks to her brilliance in doing some cross-pollination!

You’re always building a fanbase. You’re in this for the long haul. Build the relationships and don’t get so focused on any one little thing that you forget the point: It’s never the one thing you do; it’s all the things you do.

Originally published by Actors Access at http://more.showfax.com/columns/avoice/archives/001204.html. Please support the many wonderful resources provided by the Breakdown Services family. This posting is the author’s personal archive. 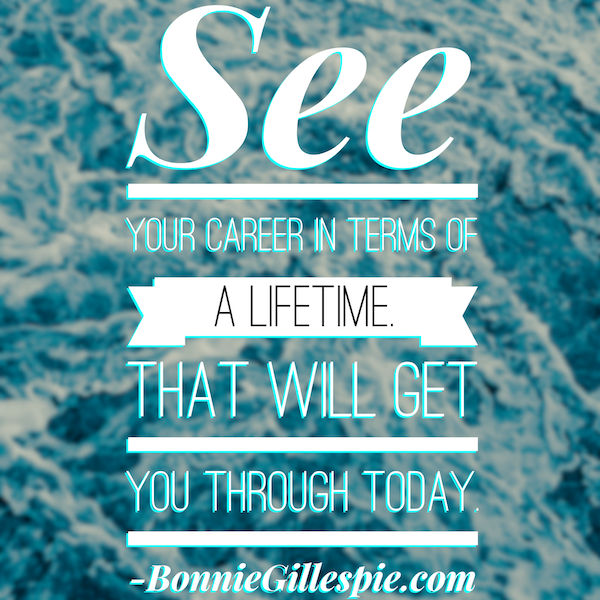