Regular readers know I love to apply the inverted pyramid to the actor resume. The inverted pyramid, of course, is something they taught us in journalism school, and it’s all about leading with the meatiest part of your story, then tapering off to the stuff that’s less important. Yup. It’s unlike any writing you were taught in your composition classes, where that conclusion paragraph had better be a real winner. You let the less-awesome stuff go last because the story may be cut for space in the newspaper or magazine in which it appears. (Ah, print journalism. The good ol’ days, grandpa.)

Just like you don’t want to “bury the lede” in your hot story, you don’t want to put your hottest credits under the ones that are less badass. You know that about your resume thanks to your relentless reading and rereading of the awesome Resume Feng Shui work I’ve shared with you.

But what about your demo reel? Can the inverted pyramid help you get your reel in order too? You betcha.

There’s a hierarchy of material, ranked badassiest to suckiest. You want as much of the former and as little of the latter as possible. And if all you have is the latter, you have to decide if it helps you at all, or if it just hurts you.

Sometimes it’s better to be perceived as “so new there’s no footage” than to have something that gets you excluded from those first little auditions you could get based on your credits, if not for that horrible little self-shot monologue or in-class scene that just makes the CD say, “Not ready yet.”

What’s considered “best,” as footage goes? Studio produced material that got distribution. Network TV scenes that aired nationally. Maybe a really fantastic little project that happens to be indie, but is done with a professional cast and crew, stars recognizable folks, looks wonderful, and does well at festivals. Even web-based projects can sit at this tier if they meet the same criteria as the fantastic little indie I just described.

Next tier down? Indie stuff that’s less awesome. Spec pilots, the majority of the web-based projects out there, most student films, shorts — basically anything on which people are learning and you can *see* the learning in the finished product. A boom shadow, jump cuts, continuity errors, lighting issues, sound-sync problems, poor writing, less-than-stellar acting by your co-stars (or even by you; be honest with yourself about how much you grow as an artist, every day) are the typical sins of these projects. It doesn’t mean their footage is useless! It just has to be very judiciously edited and sometimes some of the “learning” still shows.

Lower than that? The all-voiceover student film in which you’re on-camera in a principal role, but not heard (or only heard in voiceover), the self-produced “first pancake” (the thing you did to learn, but which has a lot of flaws), industrials, reenactments, commercials, and anything you paid money to have shot at one of those production facilities that does reel packages (we can ALWAYS tell, with those). Again, none of this is — by classification — useless on a reel! It’s just lower-ranked than the juicier stuff. Used sparingly, these items can be helpful in rounding out a reel. But if they’re all you’ve got, well, there are concerns about what you’re teaching the buyers about what to expect from you, should they cast you.

The lowest? Stage work. Scenes done in class. Self-taped auditions. Monologues. Live improv or sketch shows. Stand-up comedy. Anything that’s not acting but that you may keep on a reel in a minor market: singing, dancing, modeling, appearances at trade shows, hosting, interviews you’ve done about your acting, appearances on the local news, your extra work in which you walk by a famous person in a huge film, etc. These items are almost never on a “real” reel, and I find that out-of-market actors will include them on their first LA reel, hoping it helps prove, “Hey! I’ve worked! See?” without realizing that’s not the function of a reel (more on that in a sec).

It’s not that you cannot have any of the lowest stuff on your reel; it’s just stuff you should use sparingly and get off your reel QUICKLY as soon as you have higher-tier stuff.

Because your reel is not a retrospective of everything you’ve ever done on camera… it’s the story of how to cast you next.

Sure, if you want a career as the next top industrial actor with the occasional non-sync sound undergrad student film, keep those clips prominently featured on your reel. But as soon as you have footage — even in a quick one-liner — on a major network show or a studio feature film, you are confusing your buyers by cluttering up your reel with work you no longer hope to book.

It’s not about proving you’ve been on set or that you didn’t get left on the proverbial cutting-room floor. It’s more about educating buyers on what you can do and where you’re headed.

And — again — if you’re on the newer side, good. You absolutely do not need to represent yourself as someone who has loads of footage that is at the lower end of the inverted pyramid. Hustle to get footage that’s higher up. Enter the game at a better tier.

No, this does not automatically indicate the ORDER in which the clips should appear on your reel (regular readers know I’m a big fan of the non-linear presentation of reel footage these days, anyway). But it lets you know where to start “losing” footage. Yay! That’s an exciting day! Even if it only leaves you with one really amazing clip, so what? It may be enough to do the job on its own. How awesome is that?!

Originally published by Actors Access at http://more.showfax.com/columns/avoice/archives/001634.html. Please support the many wonderful resources provided by the Breakdown Services family. This posting is the author’s personal archive. 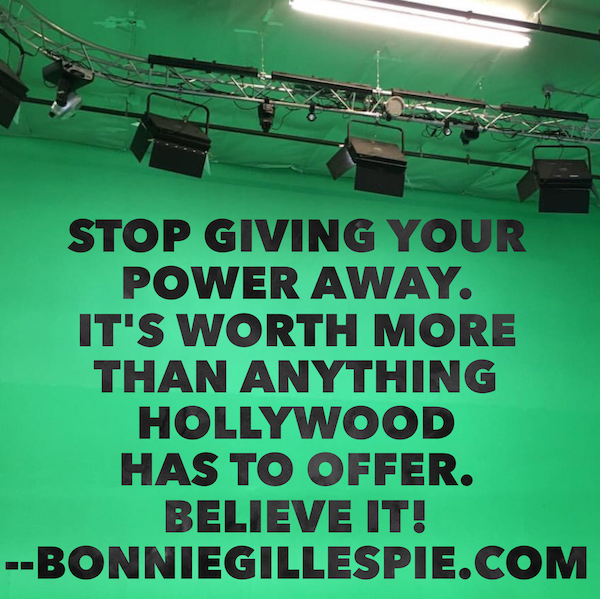