What is the Great Southern Food in Southern California Challenge? Click here for the low-down. Want to see reviews of all stops on our tour? Same link. Wanna see any photo below, only larger? Well, just click on it!

One of the major reasons we chose Aunt Kizzy’s Back Porch for our fifth stop on the tour is that it offers Sunday brunch. I think it may be the only restaurant of those on our master list that does so. So. We had to check that out.

Oh, before I get into anything about Aunt Kizzy’s, can anyone tell me what this thing is? There were two of them on Washington, just a hundred feet or so east of our destination, and there were all sorts of digging machines poised to put these huge things into the ground. What are these things and why do they go into the ground? Thank you in advance, to anyone who can tell me what this is all about. It concerned me so greatly that I did two laps before parking (also I was way early) so I could snap a few pics — all of which turned out “wavy” due to photographing while driving. Um. Oops. Did I just admit to that? Anyway… 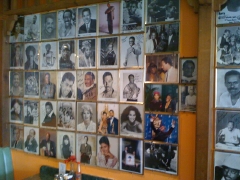 I asked everyone to gather early, because I had heard that Aunt Kizzy’s gets slammed after church (and that everyone would be in their Sunday best) and I didn’t want to worry about how to get our big table, if people started showing up late (as people tend to do, sometimes). Turns out there was no major crush of customers (although things did pick up after 1pm), but Nyah — who greeted us and gave us a nice tour and history overview (including loads of details about Cuba Gooding, Jr.’s term of employment there) about Aunt Kizzy’s — was very appreciative that we were so thoughtful as to arrive early.

We were given the option of inside or outside seating. It was a gorgeous day, so we chose the patio. When I began salivating over “sides” options, I was encouraged to get the sides platter (four sides for $9.95). Seeing as each side is $2.50 on its own, you can imagine how elated I was to save that nickel by ordering four sides, together. :\ That said, I have to say that I was very impressed when our waitress — Amber Rose, who is all about the high-five — offered Ryan a sample of the dressing and gravy, when he wasn’t sure whether he wanted that with his order. “You wanna try some?” she asked. “Uh, yeah,” was Ryan’s response.

No question. Several of us would order the dressing and gravy (and then we’d launch into a conversation with the yankees among us about dressing vs. stuffing). No regrets. That was probably one of the best items on any plate! We also ordered a bit of fried okra “for the table” and it came out fast, hot, and — well — over-breaded for my liking. The majority ruled we’d all prefer a cornmeal and pepper dusting to the full-on breading offered with this okra. Bummer. I’m still jonesin’ for fried okra done right.

Derek said, “Mason jars? Check!” when the drinks arrived. I had to cut my sweet tea with my water. It was just far too sweet. But I’m a wimp for sweet drinks. My beverages of choice are water and vodka. So, anything with sugar is going to need watering down, most likely. Of course, that sugar is a sweet, sweet (and seductive) thing, upon first sip. My immediate response, “Yes ma’am!” (Realizing as I write this that the Aunt Kizzy’s website boasts beers, wines, and mimosas — the latter of which I was looking forward to having — but no alcoholic beverages were offered. Wondering now whether Mason was correct, when he mentioned that a good, southern place like this probably wouldn’t offer booze on a Sunday. Hmm. No one asked, so I don’t know for sure.) When Ryan saw on the menu, “All I want is chicken and a waffle,” he said, “That’s perfect. That’s just how I’d order it too.” 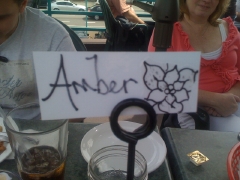 Amber was great about helping us order. She suggested best “shareable” items, saying, “Sharing is caring,” when we’d debate as a group about particular options. While we waited for our food to arrive, we discussed whether Ryan should re-up with Compatible Partners, David’s reconnaissance mission on diners for next year’s tour, and what’s uglier: Uggs or Crocs. Then Amber showed up with cornbread muffins fresh and hot. The talking ceased. Immediately. (Note Laura’s very cool Feng Shui-friendly purse hook in the background. So flippin’ badass. Must have.)

Oh! Before I forget, joining me for the fifth stop on the GSFiSCC were David, Derek, Kathi, Laura, Masasa, Ryan, Tanya, and Shirley. 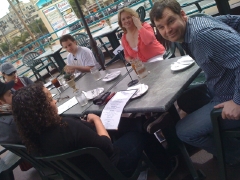 David — who was a little late — mentioned having “a filtering problem” when it comes to bad theatre, which made me laugh like crazy. And Masasa — who arrived even later — showed up in her church hat and explained the subtle difference between “CP Time” and “African Time,” the latter of which is apparently worse by 30%. Shirley proclaimed that certain things are best when cooked in bacon grease. Everything is, we agreed. Further in this category, Masasa mentioned, “I could Paula Deen out on some butter.” Yes. We do appreciate our food in this group!

Masasa was not happy that I neglected to wear my gloves. I should’ve mentioned to her back when we discussed Sunday brunch wardrobe that my “gloves” are actually Hello Kitty mittens. Not quite the same. 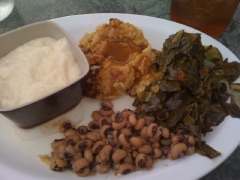 I ordered grits, dressing and gravy, collard greens, and black-eyed peas. Not pictured: a biscuit. That biscuit was probably the best thing I ate, frankly. Or maybe I’ve been dreaming about it because it is so far off the “allowable gluten scale” I’ve created for myself on these tour stops. *sigh* It was really delicious. Really. Sadly, the grits were not. They were the worst I’ve ever had. I passed them down the table and no one would have more than a bite. Not authentically southern by any stretch and just absent of any flavor. But the dressing and gravy — as I hinted above — was a real treat. Greens and beans, fine. Nothing special. But plenty good.

Kathi had some mac and cheese, chicken, and bacon — and I had some of that bacon (a bit of Kathi’s and a bit of Derek’s, in fact). Holy crap, that was good. Really really good. And Kathi’s review on her mac and cheese (which I did not sample) was, “Oh, man…” which sounded pretty positive to me! And to Derek. And to anyone else at our end of the table. Kathi seemed to really like that mac and cheese!

Ryan went for the scrambled eggs, mac and cheese, dressing and gravy, and bacon. Awesome! Tanya had the chicken and waffle, after which she said, “I feel a little pregnant with food.”

Laura chose chicken, mac and cheese, a BBQ rib, and black-eyed peas. I sampled a bit of that rib, and it was tender and delicious. Laura said the sauce was really good, and she knows her sauce! Shirley shared some of her chicken with me, which was on the dry side, but still tasty. Certainly nowhere near Roscoe’s-level chicken. Just sayin’.

When Masasa’s smothered pork arrived, she was none too pleased. (See last stop on the tour for her candid thoughts on “meat in sauce.”) She tried to get me to take it home to my cats, but Derek decided he’d sample it. After two bites, he was done too. No one liked this, it seems. Uh-oh. As for Masasa’s thoughts on the mac and cheese — remember, she had lots to say about this dish at our last stop — she will be going back to Chef Marilyn’s for mac and cheese. Back to Aunt Kizzy’s? “I wouldn’t drive out here again,” she said.

So, how’s it looking like Aunt Kizzy’s Back Porch measures up, using the criteria I set out when issuing this Challenge.

Eh. Ryan mentioned everything was pretty low in sodium, and I don’t disagree with that. All who sampled the chicken mentioned it was a little dry but the breading was pretty good. Biscuits, cornbread muffins, waffles, mac and cheese, dressing and gravy, and most of the other sides were good. Grits were inedible, as was the smothered pork.

Kathi summed it up, saying, “seems a little high.” And yeah, based on portion size and prices we’ve seen elsewhere, this was a little on the high side for the amount of food that showed up. That said, it’s still a pretty reasonably-priced brunch option, for Los Angeles.

For sure. Nyah and Amber Rose made us feel at home from the instant we arrived. Tales of their 25 years in business, the wall of fame (over 1000 photos of famous people, only 300 on display at this location), the now-famous folks who worked there in the past, and paparazzi stalking celebs when they come here to “get their southern grub on” (a line that once ran on TMZ, apparently) were woven into lots of laughs and comments that you’d only let your family get away with making. Instantly casual and intimate, here. That’s southern, for sure.

Worth a visit, yes. A good option if you’re on the westside and don’t want to truck it out to Miss Peaches or do takeout from Chef Marilyn’s for something more delicious.

Connell can rest easy, as after five stops, Miss Peaches is still in the lead for service, atmosphere, food, and best overall experience. South is still the best (um, only) party-style option we’ve visited. Check back for a review of our sixth stop, coming in early April! Thanks, y’all! 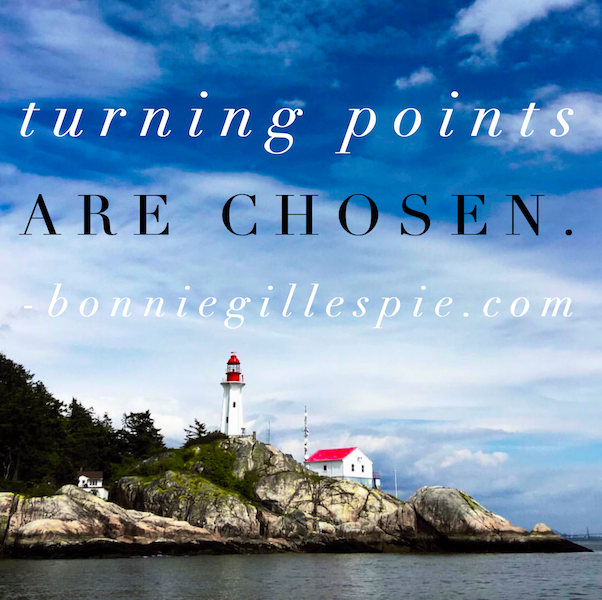