What is the Great Southern Food in Southern California Challenge? Click here for the low-down. Want to see reviews of all stops on our tour? Same link. Wanna see any photo below, only larger? Well, just click on it!

Before I dive into the review of the awesome time we had at Bertha’s, let me just say that we now have a contest going on. Until stop six, the clear frontrunner for winner of the GSFiSCC was Miss Peaches. There was no contest. And now there is. 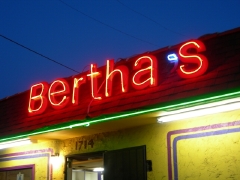 Bertha’s is the oldest soul food joint in Los Angeles, so says Rod, the proprietor. (Est. 1965.) When he learned about our challenge, he was intrigued and confident. Knew for a fact his website is the best (it is) and told us about how a golfing buddy offered to create it as a tribute to the food. That’s awesome. Also awesome: Just this week, Bertha’s Soul Food was selected to be the only soul food joint at LAX. Get ready, Delta terminal, you’re in for some good in-flight, carry-on eatin’! 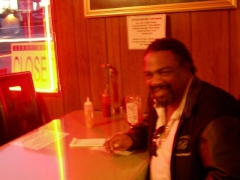 When you arrive at Bertha’s, you’re greeted by men sitting in rocking chairs on the side yard, inside the purple picket fence. 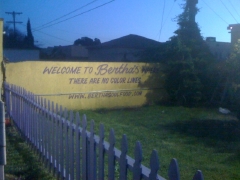 When you walk inside, you’re greeted by folks sitting on the benches waiting for takeout orders (or just hanging out and chatting). And you’re acquainted with the rules.

Gotta love a place that shows zero tolerance for rudeness. I love it! And I love that you can order at the counter or take a seat in either of the dining room areas inside. 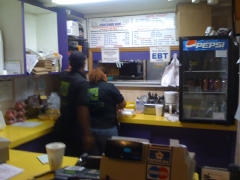 Keith and I arrived just after 5pm, way earlier than anyone else (but we knew there’d be a challenge with a 5pm start time. Still, we have some folks who can join us after work, others who have night classes… so we just try to pick a different start time and day of the week for each stop on the tour). We chose a large table in the second dining room, which had a perfect TV view for each of us. Keith could watch sports on the TV behind me and I could watch — you guessed it — the greatness that is The People’s Court on the TV behind him. Bertha’s gets bonus points all over the place, now!

André came over and introduced himself, gave us menus, and asked if we wanted to wait for the rest of our party to order. “Heck no,” I said! “We’re hungry. They’re late. We’re gonna eat!” He laughed and immediately asked if this was our first time at Bertha’s, how we heard of ’em, and whether we needed recommendations on what to order.

Gotta say, the place smelled amazing from the parking lot. Keith said, “I’m having fried chicken,” before he even saw the menu. And then he saw the menu. And ordered smothered pork chops (yes, two. That’s what comes with the order. Amazing quantities, here. But more on that in a moment).

Joining me on the sixth stop of our GSFiSCC were David, Keith, Masasa, Ryan, and Shirley. This was Keith’s first stop on the tour and David asked why I let him figure out where we would be. Soon, Ryan observed that Keith and David are basically the same guy. Yup. 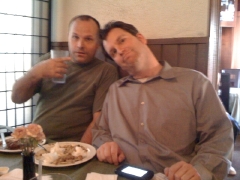 Keith toured the men’s room and came back saying, “The men’s bathroom is the sweetest-smelling bathroom I’ve ever been in.” And then he showed a photo that explained the why. Yeah. That’s a lot of smell-goods for one tiny room. 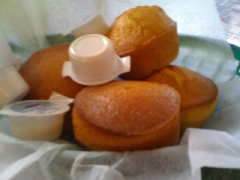 Sweetest cornbread muffins on the tour so far. Masasa refused to try ’em due to lack of real butter as an option for spread (“I don’t do spread,” she said), but hon’, I gotta tell ya, there was nothing wrong with butter-like spread on these warm, sweet muffins. Gluten be damned!

Keith’s smothered pork chops looked so good that when Ryan arrived, he ordered ’em too. And Masasa, who always dislikes “meat in sauce,” said, “This, I approve of.” It was that good. (It wasn’t pork that lived in a bin of sauce, simmering all day. It was cooked to order. And delicious.)

I ordered fried catfish after being assured it was battered in cornmeal. Clearly, that ain’t cornmeal. So, I gave most of it away and ate enough to know it’s fantastic. Just not battered in a gluten-free way.

I also ordered collard greens and black-eyed peas. Every order comes with rice and gravy. That’s not terribly southern, but oh my lordy was it delicious! “This rice and gravy is out of this world,” is what I actually said. Shirley agreed, “This rice is so good.” The greens were too sweet for me. Still good. Just sweet. And I like my greens bitter. The way god intended. Masasa called herself the “rogue on the greens,” because she likes ’em sweet. “It might be the Canadian in me,” she figures. When we launched into a discussion of hamhocks in greens, Ryan said, “That’s the thing I don’t want to know exists.” “But it tastes like magic,” I said. That is true.

The fried chicken was insane. This was a partial order. André brought out a bit of what Shirley ordered because the rest was still frying. “This is so way more chicken than I can eat,” Shirley said. No worries. We helped her. And — holy cow — this fried chicken was good. The best we’ve had. Juicy, tasty, crispy, and oh so good! I cannot undersell this. The chicken was amazing.

Green beans, mac and cheese, and of course the rice and gravy. The green beans were salty. Masasa said, “I can roll around in salt, so if I say it’s salty, that’s saying something.” Actually everything that was sweet was too sweet (except the iced tea — it was perfect, possibly the best sweet tea I’ve had on the tour) and the salty stuff was too salty, for most folks. David’s corn was “sweet. Super, super sweet,” he said. As for the above-pictured mac and cheese, I’m told that it didn’t cut it. And that Chef Marilyn’s mac and cheese is so good that Masasa has been back three times for it. Wow! Anyway, when Shirley said, “Everything’s salty,” Keith replied, “Everything’s just right.” He does love his salt.

Masasa models her collard greens, rice and gravy, and mac and cheese with red snapper. Now that is the fish I should’ve ordered. Cornmeal breaded and lightly fried. That is right. I had a bite of Masasa’s fish. Yes. That’s outstanding.

Yams were way too sweet. And cinnamony. “I think it’s nutmeg,” Shirley said. “Nutmeg always goes up in my nose.” Ryan suggested maybe it had both spices. Either way, it was way too sweet to eat more than a little taste of, so we passed it around the table and each had a bite. Not bad for a buck-fifty side item. “It’s like a pie filling,” Shirley summed up.

David sampled inhaled the strawberry soda and quickly said, “I gotta have another one of those!” I loved that the menu mentioned the options of “strawberry, pink, and yellow lemonade.” When André walked by with one of the strawberry lemonades for another customer, we all got a little excited. It’s like a black and tan. But better.

André displayed a few dessert options for us, including sock-it-to-me cake, red velvet cake, sweet potato pie, and something called a yellow chocolate, which Keith ordered immediately — with milk — and then he loved it so much that he ordered a second one to take home.

And then there was a peach cobbler situation. After I took one, scrumptious bite, I asked, “Anyone want peach cobb–” “YES!” shouted Ryan, before I could even finish my question. “Inside voice, Ryan,” I said, as I handed him the piping hot, delicious dessert. After a bite, he reported, “That is GOOD!” I offered some to Keith, who said, “Is it a pie made with fruit, baked? Then no.” He doesn’t like baked fruit. Okay. More for us! And when I offered some to David — who had arrived late, so his meal hadn’t arrived yet — he said, “I cannot have dessert before my food comes.” “Not a bite?” I asked. “I’m not that kind of person,” he revealed. Again… more for us. 🙂 Good news: André loved us so much, he gave us a freebie to go. David got it. “Yeeessssss!” was the sound of that win.

Now, let’s get to the nitty-gritty. How does Bertha’s Soul Food measure up, using the criteria I set out when issuing this Challenge?

Yes. A little on the sweet side, a little on the salty side, but yes. Good eatin’. The best chicken we’ve had. The best sweet tea I’ve had. Goooood food. Yes. “This is like all the foods that I want to feel good about myself,” Ryan said.

Absolutely. No question. It was just like home in so many ways. The flavors were very sentimental ones. Ryan said the fixins were especially southern.

Everyone thought the price was right, except for Ryan, who always thinks it’s high. We got a little generous on the tip because André was so awesome to split checks and comp a dessert. ($60 on $45, $25 on $16, etc.)

Absolutely! And the tablecloth is just like my grandmother’s with the vinyl on one side and puffy cotton stuff on the other. We were treated like family and included in on the jokes. Staff sat at tables across from patrons and chatted about all sorts of things. It really was homey. When André saw me snapping a photo as he walked by, he joked, “Facebook!”

Without a doubt. It’s good, through and through. Just a little over-seasoned in some cases.

We realized, once we get down to our final four, we should issue an Iron Chef-style challenge where the best contenders can vie — hopefully on a soundstage somewhere in Hollywood or at CBS Radford — for the title in front of a live studio audience. Let’s hope we can work that out. ’til then, check back for a review of our seventh stop before the end of the month. 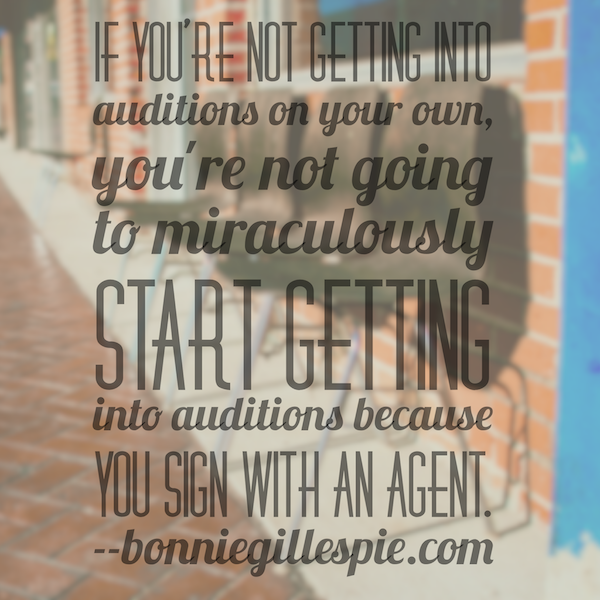