A third of the population on the planet loves you. You can do no wrong. Even before they’ve met you, they’re your superfan.

A third of the world’s population hates you. On principle. There’s nothing you can do about it. It’s primal. It’s chemical. It’s pheromones and your gut and there’s nothing to do about it except label it accurately and move on.

Of course, that leaves a third that we’ll call “meh” about you. They’re indifferent. They don’t really care enough to feel strongly about you either way.

And it’s the third of the population that’s “meh” about us that costs us the most energy.

I beg you: Stop trying to convert this part of the population. It’s a colossal waste of time. Let ’em leave your party. They’re not your third.

When I was casting the second season of the hit series Bite Me, I spotted this pillow in the production company lounge. 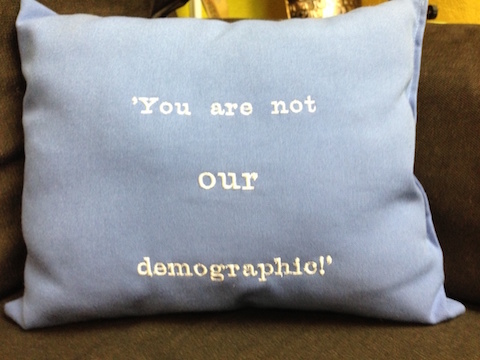 Holy crap, I love that. First of all, stitched on a pillow? I don’t know. That makes almost everything cooler. I must be in the third of the population who thinks snarky sentiments are more badass when presented in cross-stitch.

Second, how freakin’ simple! When I get hatemail (and I do), I go, “Great! Non-buyer.” (And a very specific KIND of non-buyer, non-fan, too.) That’s as much energy as I put into it. I now have a strong muscle for not attaching ANY emotion to this sort of thing.

Where things tend remain sticky for us is in dealing with someone who’s not flailing around with temper-tantrum rage but instead someone we really feel we could “convert” if they just understood us more. This ranges from the casting directors who didn’t see us do our best work and gave us stoppers to the besties who ghosted us to even folks we’re related to. We spend a LOT of energy here.

I encourage you to put ’em all in that same category: Not my third.

You’re a network. You’re programming for your key demo. If you’re HBO you don’t care that you get angry letters from people who think you feature too much nudity. Similarly, you never stress out hearing you’re “too commercial” if you’re a booking machine when it comes to nationals that air during the Super Bowl. Not your demographic!

Population of Thirds has changed my life and as I’ve shared this all over the world, I always, always, always get big thank-yous for it. The amount of energy it frees up, the amount of space it creates, the focus on where we’re HEADED… is just epic.

Try this. Then talk to me about how you work the muscle of recognizing when someone isn’t in your third. Comments are open just below!