Earlier today, I sent the below to the members of the SMFA All-Access program. Why am I now sharing it with you? Because it’s about growth.

It’s about how we HAVE TO prune in order to grow. And how — if our enoughness is low — we may never prune out of fear of letting go of something that *is* working (hello, saying goodbye to co-stars in order to enter the guest-star tier) and that’s what keeps us stuck.

Since creatives WANT to move up to the next tier, this feels too important a life-lesson not to share. Here we go!

Sure hope you're thriving! 🙂

This is important, so be sure you read through. The TL;DR is that SMFA All-Access is going away and you have options, so we need to hear from you.

I'll start with a story.

It was January 14, 2014. The fourth edition of Self-Management for Actors was at the printer and soon on its way to bookstores all over the world. I had spent a few months in the last part of 2013 carefully crafting the book in such a way that it would stay evergreen for as long as possible (because once a book is printed, it's out of date… because everything is always changing in life). And that meant doing these big free quarterly calls, offering SMFA Hot Sheets, and maybe something more.

I was sitting at Kay'N Dave's in Culver City with a few other female entrepreneurs. We gathered regularly back then to mastermind about growing our baby businesses and it was with this group of non-entertainment industry folks that I would figure out what to offer as this "something more" and how to price it — and these ladies would be gobsmacked that I would price things at about a tenth of what they would price things for their buyers. Of course, I would explain that actors have no money and that they already have to spend so much on so many things. And I would justify putting dozens of hours (plus all my heart and soul) into something that would end up making me quite literally two dollars per hour sometimes.

I was actually embarrassed to send out an email to my thousands of mailing list members saying that I was considering rolling out a program called SMFA All-Access, in which we'd do monthly group coaching calls, quarterly one-on-one calls, and periodic materials reviews… for $50 a year.

When dozens of folks signed up, I cried. (But I also cried when a handful of folks unsubbed from my mailing list, certain they were indicating that I was, in fact, nowhere near "enough" and should be ashamed of myself for scamming poor actors by charging money for what's in my brain.)

And on May 11 (my sweet mother's birthday), 2014, we did our first ever monthly group coaching call. I took screengrabs of the call dashboard so I could keep up with who was live on the call. I copied and pasted all the questions that were asked in the Q&A text box so I could study later what it was my lovely ninjas needed to know. And I very very VERY slowly got less freaked out to add a PS in an email here or toss up a tweet there now and then inviting more people into the SMFA All-Access program.

My enoughness grew. This was 100% an outside-in style of enoughness though and it was fleeting. When anyone cancelled membership? I would be spun out into a pit of despair. Clearly, I am a horrible person, I've done something wrong, and I have to be punished for whatever that was.

But the part of me that was finding such joy in gathering each month with this group and then quarterly in one-on-ones started feeling more confident, more safe, more empowered, just like my clients! So, over time, we raised the prices — never, never, NEVER going up on anyone's rate (so, yes, there are still to this day more than a dozen of you in at $50/yr.) — and my enoughness became less defined by how many people unsubbed from my mailing list or from my programs and way more about the value I know I put out into the world daily… more importantly, my enoughness became more about who I *am* and less about what I *do* for anyone else.

Over time, my lovelies, there was a shift. A tier-jump if you will. Most importantly, an inner-fortifying of enoughness rather than an outer-validated one.

As our other programs and offerings took off in way bigger ways than SMFA All-Access ever did — and especially as Get in Gear for the Next Tier taught us that enoughness is what we teach (the tools are secondary) — my body started letting me know that *it* had something to teach me. Something it had held off on 'til I was truly ready (and for me, "ready" meant sober, no longer obsessed with outcome, less of a perfectionist than ever before, and open to receive wisdom from entirely new places). And I am currently building from scratch an enoughness mastermind intended to focus entirely on upper-limit problems — recognizing them, preparing for their inconvenient emergence when success happens at each new tier, and executing strategies to move through them in as grace-filled a way as possible for each of the participants in this new offering.

I cannot stop filling up pages and pages and pages of what this new mastermind will be (though it has no name yet, which annoys me… except I know its name will come. Just like when I used to write poetry, the title was always something that surprised me AFTER I wrote the last line. We'll get a name for this baby. 'til then, it's got a lot of nicknames that make us happy here in Team Cricket Feet. Pufferfish).

And when I show up for an All-Access monthly call with only three people on the line besides me, I know it's time to do some pruning.

But here's the thing — and that's why this story feels important to share in its entirety — every time I thought about transitioning All-Access out of my life, I would get profoundly sad and find no way to elegantly make it happen. Which is crazy! Because coming up with elegant strategies is a superpower of mine that I use every day with clients all over the world and at every tier.

Then one day my amazing team and I did enough chatting about this program and logistics that we finally got past all that and down to the sadness I was feeling in letting it go. I said the words that made us *all* know without a doubt the time is right. I said, "It's like if I let go of this program, I'm really saying goodbye to the part of me who thought she was insulting people by asking for a sad little $50 a year to get so MUCH of her heart, soul, and mind. If the program no longer exists, I really am stepping into the reality that doesn't need a safety net of low enoughness."

And there it is: That thing that prevents so many creatives from moving up a tier. That thing that creates and feeds upper-limit problems. That thing I coach OTHERS into healing all the time! I was still feeding the tier at which I worked for copy-credit-meals and wondering if I could straddle into the series regular tier if I just stretched enough. My bargaining in this was doing things like incrementally raising the price over the years. This was my way of saying, "No! I'm *totally* enough and I'm *totally* at the next tier! I'm just gonna keep doing this thing over here that I once felt ashamed to even launch because, y'know, people are counting on me. I'm a GOOD upholder and that means I'm never gonna let this program go! And… um… in case 400+ people suddenly unsubscribe from Get in Gear for the Next Tier simultaneously, I'll be safe because I have someone's little $50 coming in soon."

What a fucked up bunch of messaging to share with the universe about your enoughness, right?

But you may be doing it too!

And that's why I'm sharing this beyond just the SMFA All-Access membership. Coming clean about pruning is important. Pruning is a reality of growth. (Tweet it.)

As much as I talk about how actors have to stop doing copy-credit-meals stuff if they're ever gonna be consistently paid to work (then *choosing* when to work for free because it's a brand-builder, a relationship-builder, or a mitzvah), here I was seriously trying to keep one foot in each of these tiers that are massively far apart.

No wonder my body went "out" on me. It's not meant to stretch like that!

So, today's announcement is that the SMFA All-Access program is no more. After our monthly group coaching call in September, we'll stop showing up for those monthly calls.

Here's what that means to you, lovely subscribers (at whatever dollar amount you came in on). 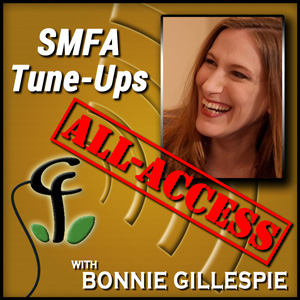 You may continue to keep your annual membership going and collect one coaching call per quarter from me because that's a sweet deal no matter what (the cost of four quarterly one-on-one calls would be $600, so even at the highest price of an All-Access membership [$320/yr.], you're getting one hell of a deal just by staying "in" the former program, financially).

We'll kick you a refund for whatever's left on your membership after the September call.

Because, hey, you may have been all about the monthly calls! So we want you to have options! 🙂 But if it's me? OMG, do I stick with a cheap-ass coaching deal. Of course… you do you. We'll work it out, either way.

Take some time. Think about it. Do some math. Or just commit now if you — like most folks we've told thus far — are all about the, "Um, YES! Congrats, Bon. This is amazing! You GO to that next tier! And I'll stay in for the coaching!" We'll keep sending you that quarterly email that reminds you it's time to schedule. The only thing that will change will be that whole monthly thing.

OMG, it's like my business hit menopause. 😉 Ha ha!

Please feel free to share your thoughts, lovelies. I'm so glad we've had this amazing run of connection for all this time. These monthly calls and all the one-on-ones have been delightful and inspiring in so many ways! And HUGE thank you for having invested in me when I was apologetic about asking anyone to do so.

It's easy to invest in someone who struts around knowing she's enough. You can't wait to do so! But when she's apologetic and meek and stressed out about even asking anyone to invest in her? It takes folks like you who saw the potential and knew the value… even when I didn't.

I'll never forget your belief in me. It helped build up my enoughness at a time when building from within was just too difficult.

I'm sure our September call will be a party! Do try to join in live if you're around. 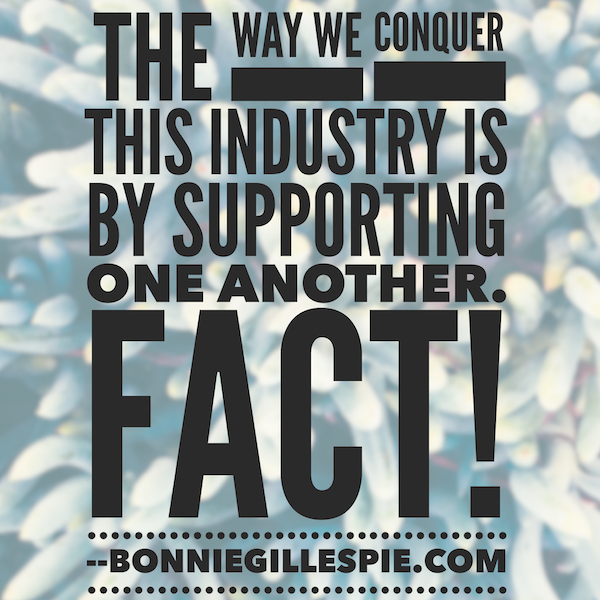