What is the Great Southern Food in Southern California Challenge? Click here for the low-down. Want to see reviews of all stops on our tour? Click here. Wanna see any photo below, only larger? Well, click it, for heck’s sake! 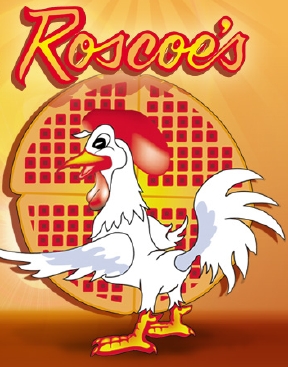 Now, Roscoe’s is a Southern California institution, but I’ve never been sure why folks consider this place “southern,” as there has never been a waffle served with chicken at any southern dinner I ever had. But it’s a place that got mentioned several times when I first posted about seeking out some good, authentic, southern eats back on 1/1/10. It’s also the place my first LA boss took me in 1993, when he promised my mother he’d be sure I ate good, southern food. I reported back to my mother that he was no judge of such things and not to be trusted. 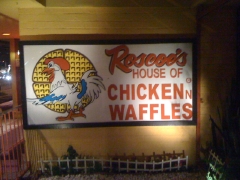 Still, due to the technical difficulties that will be revealed in the next post, we ended up at Roscoe’s for the third stop on our tour. Waffles and all. 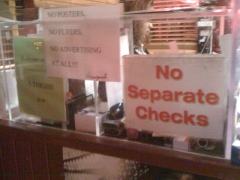 Now, there are a lot of rules at Roscoe’s. I didn’t even get to the credit card signs or the solicitation signs (yet, strangely, there were two very eager and friendly women roaming the restaurant offering tours, free drinks, and coupons of indeterminate value for a karaoke sports bar for the “luxury car set” — Is that right, Ryan? — across the street). But there are rules to visiting Roscoe’s. Yes, one in our party was still bold enough to ask to make a substitution. No. No substitutions. Read the sign. 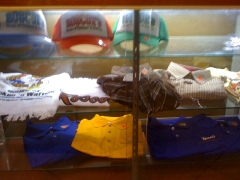 We passed the case of merch and went to table one, after making the staff aware that we’d likely have one or two joining us after they learned we were not down the street at Chef Marilyn’s Soul Food Express. No worries, we were assured. A chair could pull up to our table with no issue. Cool. (That did turn out to be true, BTW.)

Now, I usually check out a menu before I visit a restaurant for the first time. That’s mainly due to issues with wheat gluten, but also because I’m one of those annoying diners who needs to read the whole menu to decide what I want, rather than just magically spotting something hopping up and down at me from the page, begging to be ordered and eaten. Still, the menu at Roscoe’s is not too long, so we were able to figure out what we wanted (yes, even me) by the time our drinks arrived. And I, for one, was hongray. 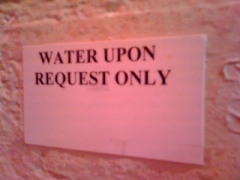 As for atmosphere, the signs are about it. (This one exists at every table.) Well, there’s also art. There are flat-screen TVs (all turned off, from what I could tell). And while we strained to hear if there were any music playing, I still think–if we heard anything–it was someone’s iPod. Eric says the Long Beach Roscoe’s is the homey-est and this one is more like a diner. Ryan mentioned expansion at the Gower St. location (the only one I have visited, although that was nearly 20 years ago), which should mean it’s a bit roomier than I recall.

Joining me for the third stop on the GSFiSCC were David, Eric, Ryan, Susyn and technically Masasa (more on that in the next post, I promise). Our time together included talk of (and quotes from) Bring It On, discussion of Light My Fire (a booth at the Grove specializing in hot sauce), and a domain check on BackYardPorn.com, which David will now not be able to snap up, as it’s already taken (.org, however, is available, which Susyn says is a great option, since that could stand for “orgasm”). We also verified that the “Carolinian” in North Carolinian and South Carolinian are pronounced differently (the LIN in the latter is said with an EE sound) and Susyn told us about something called chicken bog, which I’ll also cover in the next entry.

So… let’s eat! My goal was to order the most traditionally southern meal available. I decided that was the #23, for $13.40 plus tax. 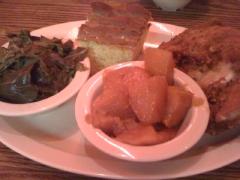 Collard greens (which I’ve decided I’m ordering at every stop on the tour, as that will be the great equalizer, when tabulating the votes at the end of this journey), candied yams (called “candy yams” on the menu, and, um, that’s probably more appropriate, because I swear they tasted like dessert), a fried breast of chicken the size of my head, and cornbread served with a pat of butter (where “pat” is code for “tablespoon of fluffy goodness”). Yum! Good decision-making on the ordering, there, Bon. 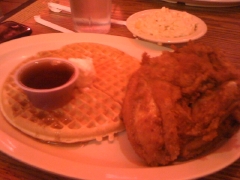 Traditional Roscoe’s fare: chicken’n waffles, add a side of mac and cheese. All three gents ordered exactly this, but Eric did request the most “baked brown” mac and cheese possible. No-go. This was as dark-brown as it got. Well, ’til David added hot sauce and pepper to his. That was pretty badass, actually. (Note: David refused a Birthday Biscuit Bottom when I offered it, once he realized it was the uneaten part of a biscuit with a fake candle mounted upon it. Pff. That’s gratitude for ya!)

[NOTE: I’m going to leave this next bit in, even though I’ve since been corrected and will set the record straight after this little story. But the story is funny and well-written, so in it stays, just for fun.]

Now, I’m not sure whether my momma tried to save me from the harsh realities of what chitlins actually are, but my whole life I was led to believe that they were chicken necks. So, tonight I decided to finally try one when Susyn offered, thinking that it couldn’t be that bad. And it wasn’t. Tasted like deep-fried beef jerky. Fine. And then I came home and started to post this blog entry, which involved looking up chitlins (well, chitterlings), to be sure I was spelling everything right and, uh…

I ate pig intestines. Awesome. No regrets. But, I think I’m done with eating chitlins in my lifetime. Maybe. We’ll see. Maybe I just need to let it all sink in.

[Okay, so those aren’t chitlins at all. They’re chicken giblets! As Susyn informed me just now over at the Facebook, “While I have eclectic food tastes, I don’t think even I would eat chitlins! Giblets–I was always told–are the stomachs, hence the tough, chewy taste. After doing some research this morning, the official word is that giblets can be the heart, liver, and gizzard (secondary stomach). But, what I had was clearly the gizzard. And yummy it was! 🙂 There you have it!” So, thank you Susyn for setting me straight! I ate chicken innards, not pig innards. Hee!] 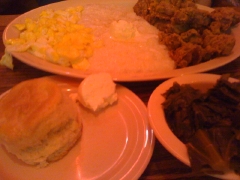 Here are the chitlins chicken giblets with the rest of Susyn’s dish: a biscuit, eggs, grits, and collard greens. Everybody shared everything (I sampled everything but biscuits, eggs, and waffles, I think) and everyone agreed that everything was tasty and plentiful. I actually said to Ryan, “Oh my god, I think this is the first time in a year of eating together that your plate got cleared before mine did.” (He’s a notoriously slow eater and likes to keep his food around even if he’s not going to finish it, just in case.) His response, as I continued to pick at my food long after I was full: “I couldn’t stop!”

We sat for a bit and talked and laughed while enjoying the wet-naps the waitress brought us and each other’s company, then it was time to head out. Eric offered me a plastic bag as a souvenir, to which I replied, “No thank you; I’m de-cluttering.” (Thank you, David, for capturing that, plus for telling us all about the Dragon Dictation app, which I must remember to download, seeing as I now recall you’re the second cute boy to tell me about it in 2010 [I’m lookin’ at you, Bill the DILF].) 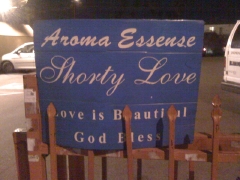 As we left the restaurant and headed back west on Pico on foot toward our cars (still parked at Chef Marilyn’s), we were greeted by the smell of a lovely incense burning in the bushes just under a Roscoe’s window (let’s just say something else was burning off the back of the parking lot, probably justifying the very large portion sizes provided at Roscoe’s) and then spotted the sign offering us information about the scent. There was a table, but no one manning it. Perhaps we were too late to buy any incense. Oh well, we weren’t too late to get back to Chef Marilyn’s and experience our fourth stop on the GSFiSCC tour. But more on that, next post.

Meanwhile, let’s see how Roscoe’s measures up, in the criteria I set out when issuing this Challenge.

Yup. If you like lots of food, come on by. Several locations to serve you. The chicken is almost “broasted” (roasted in a pressure cooker, according to Eric), but the waitress assured us it was deep fried in oil, and the reason it tasted so moist and flavorful was “a secret.”

What is on their menu that is southern is certainly authentic enough. The collard greens had a kick. The grits were buttery. I didn’t try the sweet iced tea — Did they offer any? — but I think I got more than enough sugar for the day in my yams.

Looking at the menu, I thought the prices were high ($13.40 for one chicken breast and two sides, plus cornbread, for me), but when the food came it became clear that there was way more food on the plate–scratch that, it was a platter–than I had anticipated. Five were fed for around $87, plus tip. Not bad at all!

We decided no, mainly because your grandma would allow substitutions (says Susyn) and offer water without you having to request it. She wouldn’t share the secret to the fried chicken flavor either, but she’d tell a joke or two to take the sting out of that.

Hmm… well, I can’t find where Roscoe’s says they serve southern food. I think folks around here just made that up and decided to tell their southern friends that there’s good southern eatin’ there. So, since Roscoe’s doesn’t seem to want to be southern and is really just offering good, down-home soul food (which, naturally, happens to include a good number of authentic southern options), I’ll say, sure! You can get your southern grub on here just fine.

Miss Peaches is still in the lead for service, atmosphere, food, and best overall experience. South is our only alcohol-serving contender at this point, but that’ll change at stop five, later this month. All three stops have involved loads of fun and lots of laughs, plentiful food, and good times. And isn’t that what southern eatin’ is all about? 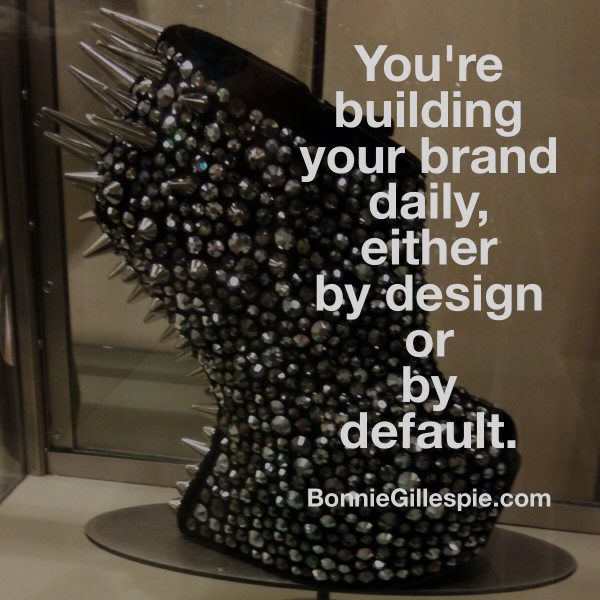